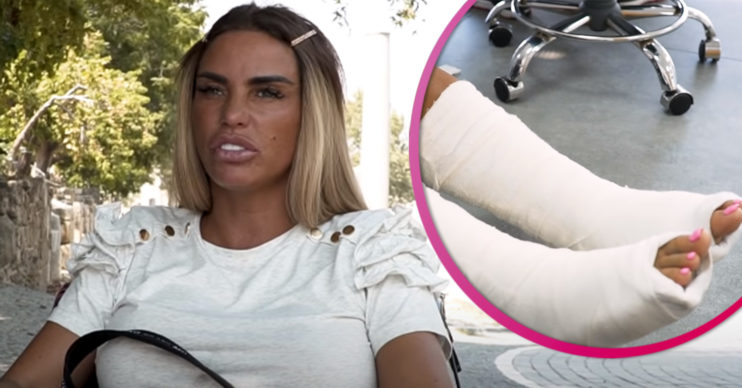 Katie recently underwent a five-hour operation on her feet

Katie Price has showed off a glamorous makeover as she recovers from her broken feet.

The mum-of-five broke both her feet during a freak accident on holiday in Turkey.

The star, 42, recently underwent an operation which involved her heels being sliced opened and pins inserted.

Read more: Katie Price arrives at hospital for operation that will ‘slice her heels open’

Despite her injury, Katie is making sure she stays glam.

She shared two photos to Instagram after getting her makeup done.

Katie told her followers: “Loving it that @zoejamesmua is back.

“Although I have to rest with my legs up I wanted to feel glam and play with about with make up!

Meanwhile, Katie has reportedly lost half a stone in five days because she’s “in so much pain she can’t eat.”

A source told The Sun: “Katie’s on all these pain medications but she just can’t sleep she’s in so much pain.

“She’s gone off her food, which is unlike her, and has lost half a stone since the operation.

“She was already tiny, so everyone’s trying to tempt her into eating again as she can’t lose much more.”

Earlier this week, Katie confirmed she was having a five-hour operation.

A rep for Katie told The Sun: “Katie is terrified – the operation will take five hours and have two highly skilled surgeons working on her at the same time.

I wanted to feel glam and play with about with make up!

Meanwhile, Katie explained her injury on her official YouTube channel.

She said: “Silly little accident. I was running, jumped over a wall because it was a little shortcut.

“And I didn’t really judge the height. I fell funny on my ankles. I fractured the hairline in my heels and stuff.”

Read more: Katie Price arrives at hospital for operation that will ‘slice her heels open’

Katie recently praised her boyfriend Carl Woods for looking after her following her surgery.

However, she hit back at articles suggesting fans feared Carl was ‘using her’.

Sharing a screenshot of an article, Katie fumed: “Total 100 percent made up story. Why are you writing absolute rubbish about me and my boyfriend @carlwoods.

“The truth is @carlwoods is looking after me impeccably and is amazing!”