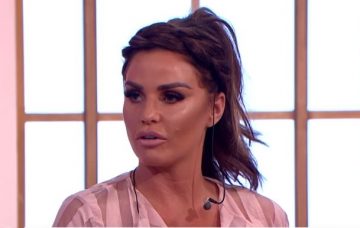 Katie Price thanks surgeon for her “new face”

She spoke of her devastation at the results of a thread face lift last year but now Katie Price finally has a “new face” she’s proud of.

The mother-of-five has taken to Instagram to show off her latest look, thanking her surgeon for restoring her appearance and her confidence.

“Friday feeling so happy with my new face. Thank you Frank Plovier feel so much better,” she wrote alongside the headshot.

In the picture, the Loose Women star looks flawless with full lips and bold eyebrows, with her long, brown hair styled in big curls.

The image gained more than 17,000 likes within just a couple of hours of being posted and many of her fans commented to compliment her appearance.

“So beautiful,” “stunning” and “gorgeous” were just some of the words they used to describe her new look.

“I have never seen you look better. You look breathtaking,” gushed one fan.

“Oh my Katie you look amazing!!” said another.

Last September, the 39-year-old revealed a thread face lift had given her the results she hoped for, forcing her to undergo a mini face earlier this year.

She told  OK! magazine her children were frightened of her appearance following the first procedure.

“Princess and Junior were scared when I removed the bandages – I looked like a puffy alien!” she said.

“Everyone was like: ‘What have you done to your face?’ I absolutely hated it and it was getting worse and worse. I was being absolutely crucified for how I looked and I’m not surprised – I looked dreadful.”

Then in the November, her confidence took another knock when she went to Turkey to have her teeth done and had an allergic reaction to penicillin.

She said on Loose Women afterwards: “I realised it was because I hadn’t read the box – I’m allergic to penicillin and that’s what I was taking. I was ill for days. I was crying and saying I couldn’t go on air.

“Anyone who has any surgery – you don’t just have the surgery and look great, it’s always the in-between.”

But now the reality TV star is finally happy with her post-surgery look.

Her confidence boost comes after she was slammed on Sunday for dropping out of the London Marathon.

She was taking part in the 26.2 mile event to raise money and awareness for the British Lung Foundation, in honour of her mum, Amy, who has a terminal lung condition.

But she only made it to nine miles before having to drop out, blaming the heavy costume she’d chosen to compete in on what was the hottest London Marathon’s history.

What do you think of Katie’s new look? Leave us a comment on our Facebook page @EntertainmentDailyFix and let us know what you think!