Ex glamour model Katie Price had fans guessing after hinting she has got wed for a fourth time.

Katie, 41, seemed to suggest on social media last night that she has got hitched to toyboy personal trainer Kris Boyson.

And the 30-year-old weight loss specialist also stoked speculation about the couple tying the knot by sharing Instagram posts yesterday that suggested he was part of a wedding.

However, many followers were quick to point out that Katie is not yet divorced from husband number three Kieran Hayler - which could prove a bit of a stumbling block to her becoming the new Mrs Boyson. 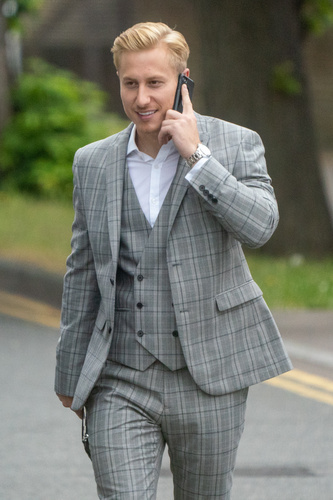 Fans began to get excited about the possibility of a Pricey wedding when the mum-of-five shared an Instagram Story of a plaque referring to a ‘Mr and Mrs Boyson’ and yesterday’s date, as if it should be commemorated.

And while some fans on social media wondered whether this could be an indication of a change in marital status, many others just ploughed right in to offer their best to the happy couple before any ceremony was confirmed.

Happiness is nothing but deserved.

"Has she got married," asked one follower on a separate post promoting Katie's TV show.

"Did you get married today? #InstaStories," echoed another.

"OMG I think she just got married," commented another person, jumping to their own conclusion.

Another fellow well-wisher for whom one Instagram Story was proof enough contributed: "Congratulations to you & Kris! 🎉💁🏻‍♀️."

And another enthusiastic fan added: "Congratulations queen pricey💜happiness is nothing but deserved 💞😇."

But while Katie's social media accounts contained only one hint about a wedding, Kris' offered up a couple more.

He wrote: "BOYSON BOYS! So privileged to be part of such a big day. Thank you to @danboyson7 & @courtneyattrell - Love ya both!"