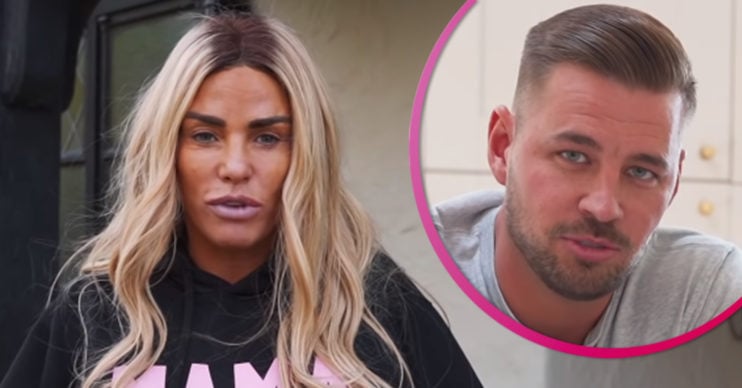 Come on Katie, some of us can't even get breakfast in bed!

Katie Price is one lucky woman as her boyfriend Carl Woods spoiled her on Valentine’s Day.

With the most romantic day of the year in full-swing, it looks like Carl has been planning on how to dote on the TV star for quite some time.

Carl, who started dating Katie in June last year, spent a whopping £10k in a bid to show just how the former glamour model means to him.

What did Katie Price get from her boyfriend on Valentine’s Day?

Katie’s day started with a gorgeous £500 hamper from her other half.

But it turns out that was just the start.

According to The Sun, Carl spent a whopping £10k on two very expensive bespoke bouquets.

A source said: “Carl wanted to make the day really special so splashed out on two bouquets worth a whopping £5,000 each.

“It’s a lot of money but he says Katie’s worth it – it’s their first Valentine’s Day together and he wanted to show her what she means to him.

“He ordered two different kinds to make sure he got Katie’s special gift spot on – she’s going to love it.”

The exclusive gifts, from Endura Roses, are known as the most expensive bouquets in the world.

Katie told the publication: “I never expected all of this. There’s a cabin in the garden and the decorations are unbelievable.

“I love my beautiful diamond necklace too. It’s not quite an engagement ring yet, but he reckons I’ll get that before my birthday in May.”

It’s been a tough year for the star, who finally appears to be coming out the other side a new woman.

Katie opens up about going sober

Earlier this year, Katie bravely opened up on her rehab stint.

Speaking on FUBAR Radio, she said: “Since I’ve been out of The Priory, I have not drunk nothing.

“And now I’ve forgotten what it’s like to drink, and that’s not like me because I’m quite sociable and stuff. Then obviously I was into the coke because I was self-medicating.”

She revealed that she’s been sober for a year and counting.

Katie added: “People are hating it because I’m so assertive now. I’m back to how I was, and they don’t know how to handle me, cause they were so used to me for the last couple of years being down and being late for everything.

“It’s because I was struggling and I just never told anyone, but now I’m on fire.”

She said: “When I look at it all now I’m like, oh my God, I’m a completely different person now. What the hell?”