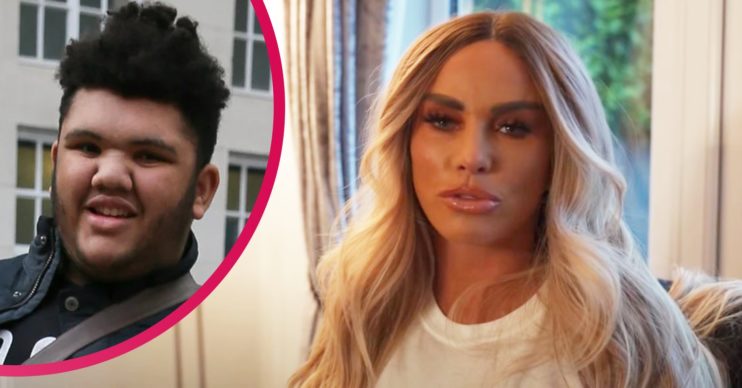 A clip emerged of people mocking the star's disabled son

Katie Price and her son Harvey could be set for justice as she revealed police are close to nabbing the individuals behind a racist video.

Last month, a vile clip circulated online of a man in blackface and a woman pretending to be the former glamour model, 42, and her disabled son, 18.

Shortly after, police reportedly arrested a 52-year-old man in connection with the video.

What did Katie Price say about the blackface video mocking son Harvey?

Speaking this week at the launch of her new range of bath bombs, Katie offered an update on the situation and said police now “have names” of two other people allegedly involved in the video.

Read more: Katie Price delights fans with intimate pic of her in bed with Carl Woods

And she warned that police are “hot on” their trail.

“Someone has been arrested. It is going to the Crown Court. We are still looking for two other people.

“We have names of the people who painted their faces. The police are so hot on it now.”

Speaking after first seeing the clip, Katie fumed: “I’ve been sent this disgusting racist mockery [bleep]-taking video about me and Harvey, mocking his disabilities.

“Clearly planned, hence the face painting! Does anybody know these disgusting humans? As I will be reporting this to the police

We have names of the people who painted their faces… the police are so hot on it now.

“Words cannot describe how upset I am, this is so cruel. These people need reporting.”

Katie is said to be determined to pursue the case as part part of her campaign against online trolls, Harvey’s Law.

Elsewhere, Katie delighted fans earlier this month as she shared a picture showing Harvey is well and truly ready for Christmas.

The photo, taken during a weekend away at a log cabin, showed Harvey looking happy in a new set of plaid pyjamas next to a Christmas tree.

The mum of five captioned the snap: “How cute does Harvey look in his PJs? He is so tall and taller than the tree.

“He loves coming away, especially @henllehall_holidays log cabins, wish we could pick it up and take it home. And even better, finally found size 7xl pjs to fit him from @bigclothing4u_.”