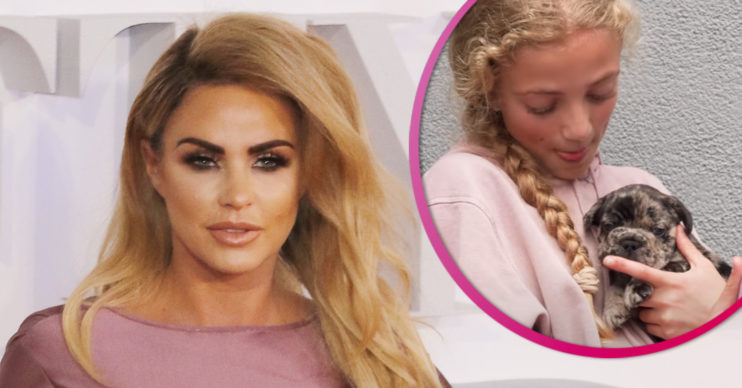 Princess was given the pup as a 13th birthday gift

Katie Price has hit back at criticism over the tragic death of her daughter Princess’ puppy Rolo.

She and her daughter were left devastated after Rolo was tragically found dead by Katie’s son Harvey‘s carer.

The pup was a gift from Katie.

Katie Price hits back at trolls after puppy’s death

Rolo’s breeder JRC Bullies has received nasty comments from trolls after paying tribute to the puppy.

Katie has defended JRC Bullies and insisted Rolo’s death had nothing to do with them.

She commented on the company’s Instagram tribute: “Everyone the tragic death of my daughter’s puppy Rolo is absolutely nothing to do with the breeders.

“Anybody blaming them should be ashamed of themselves.

“The breeders are absolutely amazing look after all the dogs and puppies at their home.

“It’s amazing clean and professional from day one and an absolutely lovely family.

“So stop trolling them as you are the kind of protons who need to be on the register for trolling when Harvey’s Law is in place!”

Katie added: “It’s nobody’s fault and something that happened tragically we are all devastated about so instead of pointing fingers think of how we are all feeling so respect us all.”

Meanwhile, JRC Bullies paid tribute to little Rolo alongside a sweet photo of him.

The post read: “Just like to say how devastated we are about the news we have seen online about Rolo.

“First of all for everybody who’s sending their hate messages and telling us what we should have done or could have done it is really not needed.

Anybody blaming them should be ashamed of themselves.

“For the people commenting on our page for something that we couldn’t control also is not needed.

“We did absolutely everything we possibly could of done to make sure Rolo was getting the perfect 5 star home.

“We visited the property, we saw exactly where he would be living.

“We settled him in before leaving and then we kept in contact with @officialprincess_andre to check on him.

“We were there 24 hours a day for her with advice and support if it was needed.”

In conclusion, they said: “People saying we should of done background checks well we did, and you can’t believe everything you read in the papers.

“Rolo’s death was a tragic accident that had nothing at all to do with his health or @jrcbullies.

“Rest in Peace our special and unique little man you will be truly missed.”

What did Princess say about her puppy?

Earlier this week, Princess wrote an emotional message on her Instagram page to Rolo.

She wrote: “Rip baby boy I love you so much.

“You meant everything to me miss you already.”