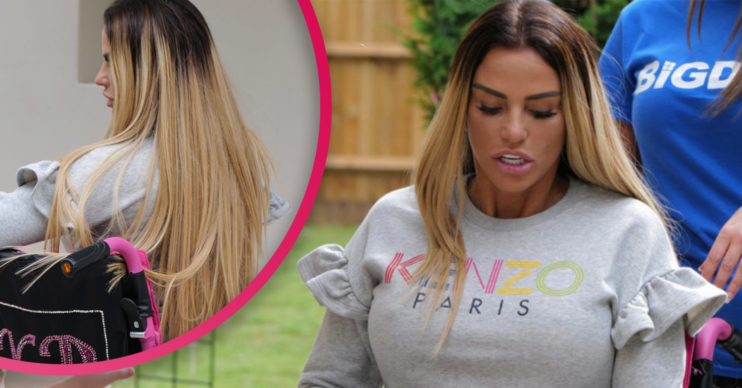 The former glamour model is determined to recover in style!

Katie Price has treated herself to a hot pink personalised wheelchair as she recovers from breaking both of her feet.

The 42-year-old reality star is currently in plaster casts following her freak accident while on holiday in Turkey.

Despite her injuries, it appears Katie is determined to tackle the next few months in style.

In typical Pricey fashion, the chair features over 6,000 Swarovski Crystals, a personalised pink velvet cushion seat and a ‘KP’ embellished chair back.

Meanwhile, the wheels are intricately covered with a selection of hand-applied gems on the rim.

The mum-of-five appeared delighted with the customised BiGDUG model, which was delivered to her home in Surrey today (August 19).

Polly Maclennan from BiGDUG said: “We absolutely love being able to help people, and Katie has been through something really traumatic.”

How did Katie Price end up in a wheelchair?

After flying back to the UK to receive medical treatment, she underwent a gruelling six-hour operation to help with her injuries.

Taking to Instagram over the weekend, Katie updated fans as she shared a photo from inside her hospital room.

Posing alongside boyfriend Carl Woods, she wrote: “Wanted to update everyone who has been sending all the beautiful messages to me. So I’ve had my six-hour op.

Read more: Katie Price still ‘in talks to appear on Dancing On Ice’ despite feet injury

“Unfortunately more procedures were needed when they entered my feet than thought, but I’m lucky I have the chance to one day get on my feet again.

“Chelsea Westminster hospital… nurses… doctors have been amazing and the surgeons totally have my upmost RESPECT and are bsolutely FANTASTIC.

“Very professional and have been very honest and straight with me to make me actually sink in my head the seriousness of my injuries MASSIVE THANK YOU.”

Katie was warned by doctors that she faced a long recovery, and could take months before she can walk again.

Since her disaster accident, the former glamour model has reportedly lost half a stone in five days as she’s “in so much pain she can’t eat.”

A source told The Sun: “Katie’s on all these pain medications but she just can’t sleep she’s in so much pain.

“She’s gone off her food, which is unlike her, and has lost half a stone since the operation.

“She was already tiny, so everyone’s trying to tempt her into eating again as she can’t lose much more.”