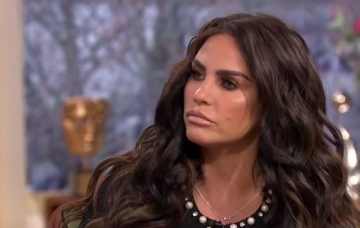 Harvey told the presenter he has a lack of banter

The clip was posted by Katie and in the footage she asks Harvey what he thinks of Piers ahead of their appearance on GMB next Monday.

Harvey said to the camera: “Hello Piers, you have [BEEP] banter.”

Katie then mused: “What, you think Piers has got [BEEP] banter?”

As Harvey replied: “Yeah,” Katie added that she thinks Piers is a “lovely man” and said: “We’ll see what happens on Monday my darling.”

The 16-year-old’s comment came as he was having a facial, and Katie found his words hilarious.

She joked that 53-year-old Piers needs to “watch out”.

Referring to the time Harvey dropped the C-bomb on live TV, she wrote alongside the video: “Harvey so funny while he had his regular facial @lastudio1 watch out @thepiersmorgan Harvey @mrharveyprice can’t wait for your banter Monday morning 🤣🤣at least he didn’t say that WORD 🤣🤣.”

The 40-year-old’s Instagram post comes after Harvey said the C-word during an appearance on Loose Women with Katie in 2016.

Harvey suffers with autism, Prader-Willi Syndrome and is partially blind.

Katie’s video of Harvey soon had her fans commenting.

Some of her followers found it endearing, with one writing: “Just love him! 😍 go Harvey! 👏👏.”

Piers saw the funny side, tweeting that Harvey’s claim was an “outrageous allegation!”

However, some fans agreed with Harvey!

And another added: “Love him, he’s spot on about Morgan 😂❤️.”