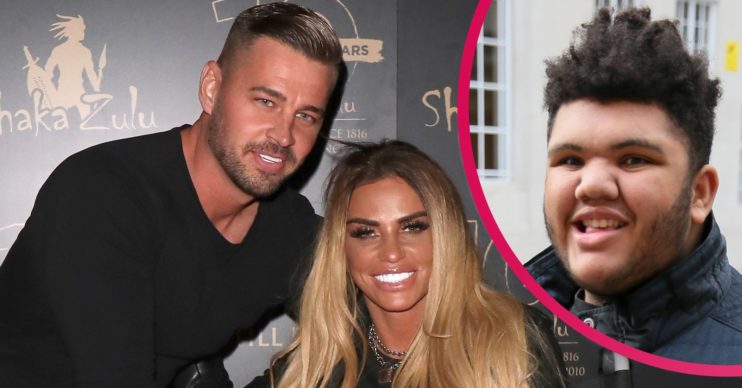 Katie Price shared a heartwarming video of her son Harvey.

Katie Price has shared a clip of her son Harvey saying he wants Carl Woods to be his father.

The former glam model, 42, shared the sweet video on her Instagram Stories.

Sharing in view of her 2.3 million followers, she asked: “Harv, what do you want mummy and Carl to do?”

The teenager replied: “Be with mummy and Harvey and Carl… your daddy.”

Katie asked: “You want Carl to be your what?”

Katie replied: “Do you? Do you love Carl that much?” to which Harvey said: “Yes Mum.”

The mum-of-five later shared a funny video of Harvey doing an impression of his mum with Carl.

He kissed his hand and did an impression of Carl and Katie kissing.

Not everyone approved of Katie’s videos

Unfortunately, many of Katie’s users weren’t happy with the video.

Dozens accused her of using him simply to make her and Carl look good – and to get social media likes.

Katie hit back at the ‘haters’

One user commented: “Treat him with the respect he deserves! He’s an 18 year old man, respect his privacy and stop using him to boost your ego!”

And a second user argued: “This is so wrong! Poor Harvey being used to promote your relationship.”

But Katie hit back with a lengthy response.

She wrote: “For all the haters, to remind you Harvey isn’t a child he is 18 years old and expresses his feelings like everybody else.

“Anybody who knows about Autism and Harvey’s other complex needs, you actually can’t make him say or do anything.

“What Harvey says is from his heart, I could show you drawings he has done of us all which maybe I should to show he always expresses his feeling in picture!

“I’m afraid you will have to get use to me and @carljwoods being together and expressing our love and with my family too as it’s real.

“So I will continue to embrace my life Happy and real if you don’t like it then [expletive] you as I’m sick of comments from people who don’t know us and only judge by what you see.”

He is not believed to have seen him since he was a young child.