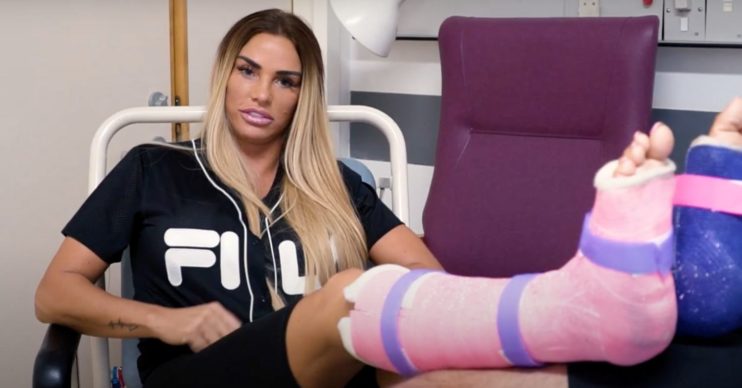 It certainly wasn't a relaxing soak for the Pricey

Katie Price has revealed just how difficult it is to wash herself as she recovers from major surgery on her broken feet.

The reality star, 42, is currently in casts following her freak accident in Turkey earlier this month – and she’s determined not to get them wet!

The star documented the ordeal on Instagram Stories last night (August 24), telling fans: “Such a mission to have a bath.”

Katie firstly made her to the free-standing bath in her wheelchair, resting her casts on the edge of the tub.

Alongside the post, she wrote: “Got to use my upper body strength to get in the bath legs up run the water and CANNOT get my cast wet.

“Such a mission to have a bath.”

Eventually the mum-of-five manoeuvred herself into the bath, where she was later joined by her dog Blade.

As time went on, Katie’s bath proved to be the ultimate core workout as she used her abs to prevent her casts from submerging into the water.

She added: “Well at least I’m using my core strength.”

Katie broke both of her feet while on holiday in Turkey.

She says she “smashed” both of her feet after jumping off a wall at the theme park The Land of Legends.

Read more: Katie Price gushes over son Harvey as he waits on her as she recovers from foot surgery

She shared on YouTube: “Silly little accident. I was running, jumped over a wall because it was a little short cut.

Soon after landing in the UK, Katie was told by doctors it could take up to two years until she can properly walk again.

The former glamour model has been open about her struggles with fans.

She recently revealed she was finding it hard to sleep due to the pain in her feet.

Katie said: “Struggling tonight to sleep again despite my feet repairing from my operation.