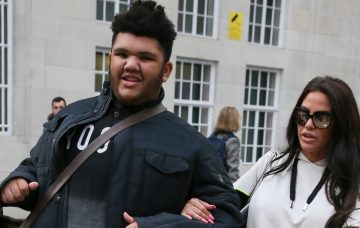 Good news all round

Katie Price has said that her 17-year-old son, Harvey, is ‘loving’ being in residential care.

Back in April, Katie, 41, admitted that she had no choice but to send her son into care saying, “I don’t want him to go, but the doctors and my mum say it is the best thing for him.”

But Katie has revealed that the teen is getting on well and ‘loving’ living away from home for the first time.

“You know what, he is loving it,” she told Metro during a publicity interview for a new series of My Crazy Life.

“Being autistic, Harvey has to have a strict routine and I think being in residential throughout the week is helping that and he is much more grounded.

“Then he has his weekends with me and the kids. He loves it now. He FaceTimes me five times a day on his iPad. He doesn’t stop, haha!”

Read more: Katie Price wants to be at The Priory “all the time”

The reassuring news comes after it was revealed that Harvey – who is blind, autistic and suffers from Prader–Willi syndrome – is at the centre of a probe into police officers alleged to have directed abuse at him .

Often the target from online trolls and bullies, Katie has been campaigning to change the law when it comes to online abuse.

But she has been dealt a blow after it was revealed that three police officers have been caught saying offensive things about him.

A report states that the British Transport Police has launched a probe at their Edinburgh station after a whistleblower tipped them off.

Three police officers are being investigated, one a constable, who could face criminal charges.

Earlier this month, Katie shared a sweet video of Harvey auditioning for Autism’s Got Talent.

“So so proud of Harvey playing the keyboard last night,” she gushed.

Have you had any strange encounters with aliens? Leave us a comment on our Facebook page @EntertainmentDailyFix and let us know!