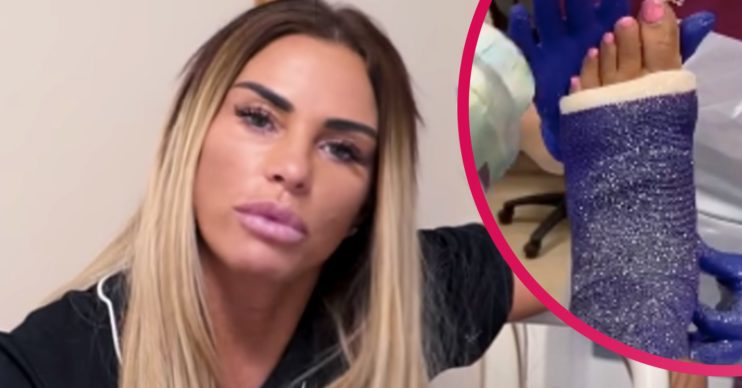 Katie underwent surgery on both of her feet just over a week ago.

Katie Price has been rushed to hospital with a suspected foot infection.

The news comes just a week after she underwent a multi-hour operation on both of her feet.

The mum-of-five, 42, is apparently in absolute agony.

What happened to Katie Price and her feet?

The Sun reports that she went to her local hospital in Epsom, Surrey.

However, she was swiftly transferred to a larger London hospital after doctors feared she had an infection.

A source told the paper: “Katie was in excruciating agony all night, couldn’t eat, couldn’t focus and nothing was working.

“Painkillers weren’t touching it so pals rushed her to A&E in Epsom.

Read more: I’m A Celebrity ‘could be investigated by the RSPCA’ this year

“Doctors decided to move her to the Chelsea and Westminster hospital for further treatment but the fear is she could have an infection.”

On Friday, Katie had shared a video on Instagram detailing how much in pain she was in.

When did Katie Price have her foot operation?

Her eldest child Harvey, 18, said he hoped she would feel better soon.

In view of her some 2.3 million Instagram followers, Harvey said:

Katie replied: “Has mummy been crying? It is only because it hurts mummy. Doesn’t it?”

She also shared on her Instagram Stories: “Struggling tonight to sleep again despite my feet repairing from my operation. No matter what I do and no matter what painkillers doctors have given me, I’m still in pain.”

Katie broke both of her feet while holidaying in Turkey with boyfriend Carl Woods and her children Junior, 15, and Princess, 13.

She says she landed “funny” after jumping off a wall while at the theme park The Land of Legends.

Harvey wanted me to film him again bless him .. love him so much and how much he expresses how much he loved his mum he is so cute ❤️❤️

She underwent an op last Friday and shared her surgery journey via her official YouTube channel.

In a video a doctor warns her that she has “life-changing injuries”.

The former glamour model went on to tell the cameras that her feet were much more “mangled” and “smashed” than she originally thought.

She also said she’d been warned that she won’t be able to walk normally for up to two years.

She is now using a Swarovski-encrusted wheelchair to get around.

Her boyfriend, Carl, has been photographed diligently pushing her about, as well as lifting her in and out of cars.