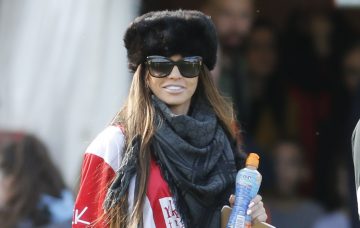 She claims to rarely see her ex-husband

Katie Price has claimed she rarely meets with her ex Peter Andre even though they share care of their two children Junior, 12, and Princess, 10.

The Loose Women panellist told OK! magazine that they communicate via text – and that can apparently only be on group messages with his wife Emily.

Katie said: “We get on for the kids’ sake… apparently he won’t text me without Emily being on it. It’s just weird when you were with someone for so many years and they are not the same person you thought and your relationship is different.”

The Mysterious Girl singer became step-dad to her son, Harvey, with footballer Dwight Yorke, before they went on to have two children of their own.

They split up in 2009 when Junior and Princess were aged three and 18-months respectively.

Far from longing for his parents to get back together, Katie admitted that Junior, “says he can’t imagine me being with his dad.”

The 39-year-old believes it’s because he now sees Peter, 45, with his new wife – 28-year-old doctor Emily – who is the complete opposite of her.

“She’s feminine, well-spoken and educated and I’m a nutter. We’re like chalk and cheese,” Katie admitted.

She added that she would love to be able to meet face-to-face with Peter one day to talk about their kids.

However, she said there is no hard feelings as both of them have moved on with their lives.

Peter has had two children, Amelia, four, and Theo, one, with Emily.

Meanwhile, Katie had a short-lived marriage to Alex Reid before tying the knot with Kieran Hayler in 2013.

They have two children together, Jett, four, and Bunny, three. Their relationship made headlines last year after Katie accused Kieran of cheating on her.

Katie is standing by her man, who still lives with her, as she said he is working through “mental health problems”.

She previously revealed in an interview with Reveal Magazine that he is being treated for sex addiction.

She said of why they haven’t divorced: “I still love him. The Kieran that I know, I love. The other Kieran [who cheats] is horrible. It’s just so far away from the man I married.

What do you think of Katie and Peter’s relationship? Leave us a comment on our Facebook page @EntertainmentDailyFix and let us know!