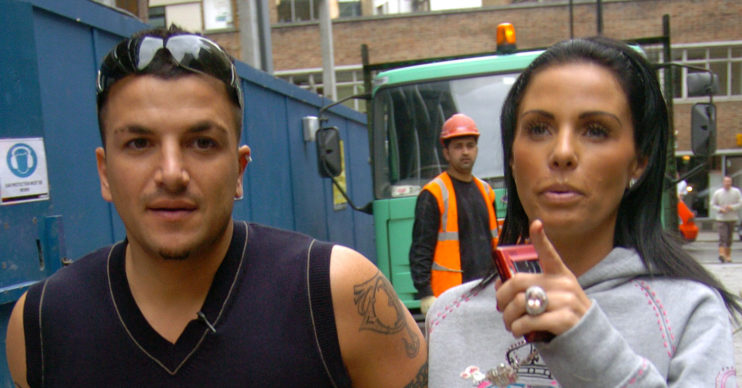 However, she hits back by saying he’s getting “old”.

She told the celebrity news mag she says to him: “You were with me for six years, Pete! You know what I’m like – you were actually the same. You’re nuts as well.”

The former couple met when they competed on 2004’s I’m A Celebrity… Get Me Out Of Here!

“We have a laugh”

Sharing two children together, Junior, 15, and Princess, 12, they are currently on good terms.

Read more: Holly Willoughby admits she was ’emotional’ sending kids back to school

Katie has gone on to marry and divorce twice – and have a further two children – Jett, six, and Bunny, five.

Katie praised Peter on a Father’s Day post this year.

She shared a slew of photos of Peter with their children and included a heartwarming caption.

Sharing to her 2.2 million Instagram followers, she wrote: “Happy Father’s Day to @peterandre between us both we have amazing children and credit to you to for being such a great dad to Junior and Princess.”

“Such a great dad”

However, the couple haven’t always been on such good terms.

In the past words they’ve negatively spoken or alluded about one another during television appearances and interviews.

But thankfully the pair are even on such good terms now that he makes an appearance on her YouTube channel.

Katie’s newfound success on the video platform has already earned her some 118,000 subscribers.

And in her latest video she engages in a FaceTime video chat with Peter.

A special preview for the video has been released to The Sun.

In the video Katie surprises Princess with a new pet puppy ahead of her 13th birthday.

He even jokes that Princess should call the pup Peter.

What do you think of Katie and Peter’s banter? Share your thoughts with us on our Facebook page @EntertainmentDailyFix.