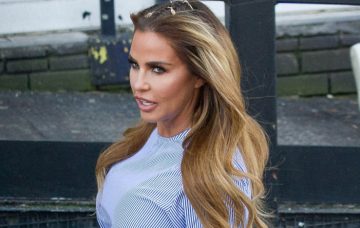 Not peace for all men, apparently

Katie Price has reportedly refused to give her youngest two children over to their dad Kieran Hayler for Christmas Day.

She had apparently agreed with her ex that he would take them today and return them on Boxing Day.

But when he arrived to collect Jett, five, and Bunny, four, Kieran was instead left on the doorstep.

A source told The Sun Online: “Kieran tried to contact Katie but she blocked him and refused to let them go, despite their prior verbal agreement that he would have them today and on Christmas Day.

“Kieran was expecting to have Jett and Bunny for Christmas and he is devastated that she’s pulled this stunt on Christmas eve.

“He has never spent Christmas without them and his entire family are all waiting for him to return with the kids.

Last week ex-husband Peter Andre confirmed that his kids with Katie, Junior, 13, and Princess, 11, would be spending the big day with their mum.

Katie’s rep has declined to comment on this story.

This weekend we reported how Katie had apparently enjoyed a big shopping splurge.

She is reported to have spent £4,000 on a spree at a Smyths toy shop in Brighton, where she bought enough gifts to fill six shopping trolleys.

Katie was spotted running out of space in the boot of her pink Range Rover and squeezing the remaining presents onto the back seat with the help of her assistant and staff from the shop.

According to The Sun, Katie is said to have borrowed £22k from a friend to avoid bankruptcy just one day before the lavish shopping trip.

The paper also reported that the ex-Loose Women star owes £3,500 to a garage owner who transformed her car with a Barbie-themed makeover – and refused to pay for the work or answer the garage owner’s calls.

Does Christmas cause drama with you and the ex over the kids? Leave us a comment on our Facebook page @EntertainmentDailyFix and let us know.