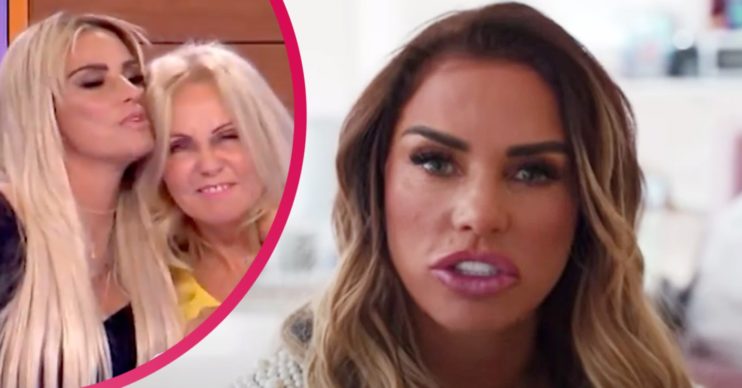 Katie's beloved mum was diagnosed with idiopathic pulmonary fibrosis in 2017

The former glamour model, who shares a close bond with her beloved mum, revealed Amy has been shielding since March whilst battling her condition.

Alongside a lengthy caption raising awareness to Amy’s condition, Katie shared a selection of photos on Instagram today (December 7).

What did Katie Price say about her mum?

The first showed Katie and Amy posing on a family holiday, while the second was of a lung scan.

Captioning the post, the mum-of-five penned: “I am supporting www.pulmonaryfibrosistrust.org who are the only UK charity to provide vital equipment to those living with the incurable lung condition PF/IPF which my mum has.

“They do wonderful work supporting people. PF cases are likely to increase dramatically due to COVID-19. PF is when the lungs become scarred and breathing is increasingly difficult. About 70,000 people in the UK have it.

“On average people survive 3 -5 years unless they are lucky to get a lung transplant. My mum has been shielding since March because her lungs are susceptible to catching the virus.”

Read more: Katie Price screams as giant rat jumps out from under her mobility scooter

Katie, 42, went on: “The Pulmonary Fibrosis Trust have just released their patient survey results which show vital lung rehab and other services have been cut due to the pandemic, just when people need it most.

“Please help us help the charity ensure people get access to the equipment they need such as mobile oxygen, stairlifts, mobility scooters. They also provide respite holidays.”

Followers were left touched by Katie’s words, with one commenting: “So glad you are raising awareness of this… I lost my amazing dad nearly 2 years ago to this cruel horrible illness.”

A second said: “Your mum is a lovely lady, she has really taken control of this disease, and is doing so well.”

Another wrote: “Your mum is such a beauty, keep her safe Katie.”

A fourth added: “Well done, awful awful disease that needs funding for support. My heart goes out to any family dealing with IPF.”

When was Amy diagnosed?

Amy was sadly diagnosed with terminal lung condition idiopathic pulmonary fibrosis back in 2017.

The awful disease permanently affects the lungs and scars the tissue.

At the time, Amy was given a three to five year life expectancy by doctors.

After hearing her mum had the condition, Katie offered to give one of her lungs – but Amy refused.

Opening up on Loose Women, Katie previously said: “She wouldn’t ever let me because I have kids but it’s not that easy.

“There’s not that many on the transplant list, they have to wait until you’re nearly dead.”

Back in June, the reality star reunited with her terminally ill mum following months in lockdown.