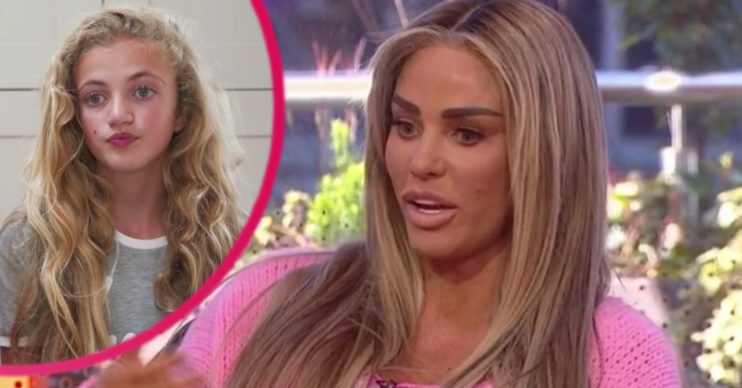 She openly admitted to using Photoshop on her photos

Katie Price has been mistaken for 13-year-old daughter Princess in a new “filtered” photo.

It comes after Katie opened up on the subject of editing during an appearance on Steph’s Packed Lunch.

The snap showed Katie sporting a heavy face of makeup and lashes in the glamorous shot.

Keen to confirm the post was edited, she wrote: “Ohh yes girls filtered.”

And it didn’t take long for fans to compliment the photo.

Did we just go back in time?!

One wrote: “Omg you look like Princess in this pic.”

In addition, a second said: “I thought it was Princess there. You look like twins.”

Furthermore, a fourth shared: “Like an older version of Princess!”

However, others preferred Katie’s natural look.

They wrote: “You still need the looks for the filter to look nice – you are beautiful.”

Read more: Katie Price admits kids have threatened to leave her if she takes cocaine again

During the programme, Steph explained 85% of teenagers were turning to face editing apps.

When asked for her opinion, Katie explained: “I am 42, so I need a bit of help with it.

“But Princess is obsessed with filters, you know when you get the heart ones? Bunny does the same.”

Katie went on to say it was easy for people to “catfish” others with the help of editing apps.

In addition, she said: “It’s alright to have fun. But I like to know when people meet me, I look sort of the same. I reckon mentally it’s got to do something because you’re so used to seeing yourself filtered.”

However, the star admitted she isn’t worried about her daughter.

She said: “She knows it isn’t real. She’s clued up on it, but there’s a lot of girls who aren’t.”

The appearance follows shortly after Katie revealed her kids “saved her” after contemplating suicide.