Reality star Katie Price has made a shock discovery after tackling the clutter in her Sussex mansion.

The 41-year-old was clearing out her home when she came across her rucksack from her time on I'm A Celebrity in 2004 - and it apparently contained rotting food.

The former glamour model was filming for the new series of her reality show My Crazy Life when she found the gross specimens and her crumpled jungle uniform.

Shall I drink more?

The Sun Online reports she gagged as she opened up the bag and found items from over a decade ago.

But even more shocking was the moment when Katie found her I'm A Celeb water bottle and she reportedly took a swig from it, 15 years after it had been filled!

The star, who also made an appearance on I'm A Celeb in 2009, joked: "Shall I drink more? It might make me (BEEPING) lose weight!"

Katie was served a blast from the past as she revisited the remains of her time in the jungle, where she met her now ex-husband Peter Andre.

But it wasn't just memorabilia from Down Under that the mum-of-five unearthed during her big clean-up.

According to the online publication, Katie also discovered some frozen food that was 17 years out of date! She rifled through a freezer and found a packet of salmon from 2002. 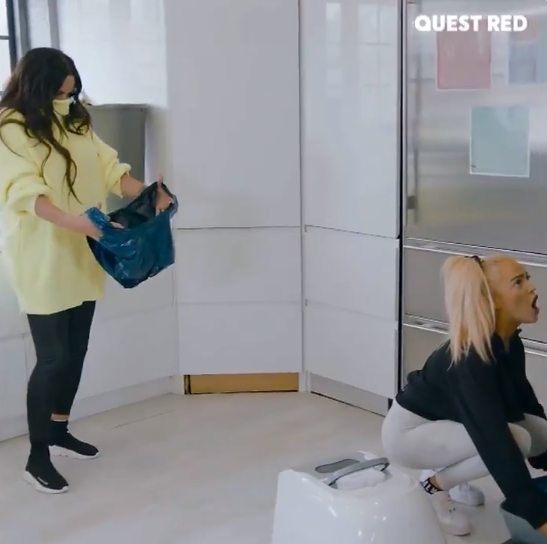 Despite reports of money woes and rumours she may have to sell her Sussex mansion, Katie has insisted she isn't going anywhere.

She adamantly told the cameras: "It's our home.

"My house is never quiet! It's a mad house! Dogs, cats, kids, horses!"