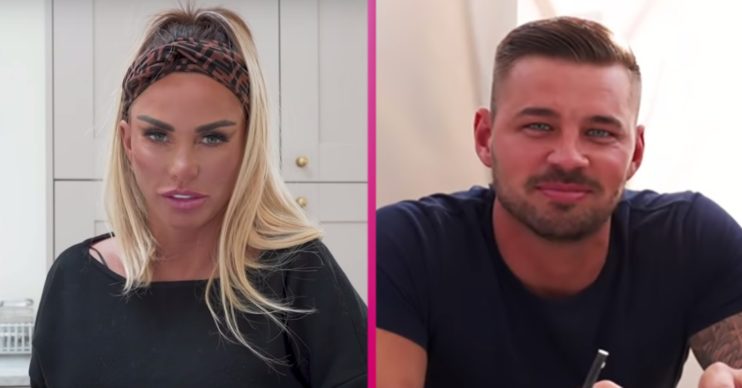 Accident reportedly happened as boyfriend pushed her wheelchair into hospital

Katie Price is enduring extreme pain after her broken feet got caught in a door, according to a report.

The ex glamour model suffered the unfortunate accident during a hospital trip on Tuesday (October 6).

The Sun’s website claims it happened as boyfriend Carl Woods pushed her wheelchair through the front entrance of the Chelsea and Westminster hospital.

It is believed he may have misjudged his timing and the spinning door hit her bandaged feet.

She had gone in to check on her feet’s progress following her terrifying fall in August.

The mum-of-five, 42, broke both of her feet in a freak accident in Turkey during her summer holiday.

There hasn’t been any permanent damage to her feet.

But according to the tabloid, Katie is keeping her mood up despite the pain. And she has already forgiven her man for the error, choosing to see the funny side of it all.

A source also reckons the mishap could have been worse if Katie wasn’t already wearing protective gear.

Happily, however, doctors are said to confirm Katie’s feet are healing up well.

An unnamed insider is quoted as saying: “Carl was pushing Katie but she isn’t blaming him at all and can see the funny side of what an unfortunate blunder it was!

“Luckily, Kate was wearing her protective air boots when the accident happened, and apart from the pain on contact there hasn’t been any permanent damage to her feet.”

The Sun’s website also reports Katie was filming footage for her YouTube channel. And so it is expected the incident may be available for fans to views when her latest vlog is uploaded in the next few days.

It was reported earlier this month that Katie may require the use of her wheelchair for another six months.

A source told The Sun: “This has been the most amazing news ever for Katie – but she’s nervous too, as the thought of being able to stand on her feet again is mind-boggling.

“She says she’s forgotten what it feels like, as her feet are literally held together with metal pins.

“For Katie, it will feel like a toddler learning to take her first steps, but it’s much sooner than she thought as she was told by doctors that she could be in a wheelchair for a whole year after the operation.”