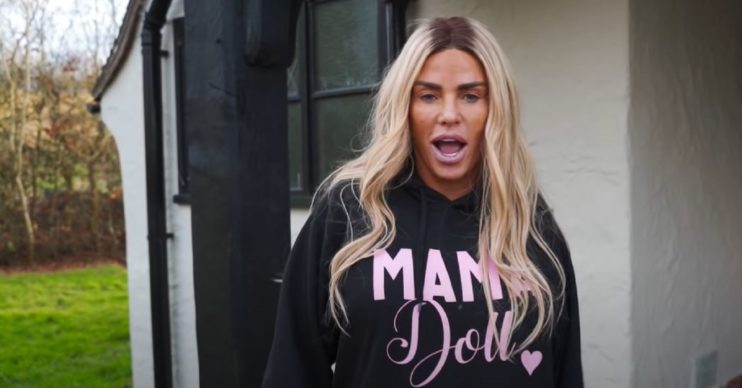 Katie Price appears to be telling the world that she is pregnant with her sixth child.

The former model has shared a picture on social media of her clutching an apparently rounded tummy.

She wrote: “Happy and healthy ❤️❤️❤️❤️ it’s the best feeling ever I thank @carljwoods for being part of me x.”

Katie Price on getting pregnant again

Just days ago, Katie denied rumours she was expecting, telling The Sun: “I’m not pregnant yet. I’ve just put on lockdown weight. But I do want more babies. Mine are getting older so I need to keep replacing them! I love being a mum.”

Earlier this week, Katie, 42, revealed her children “saved her life” as she considered suicide.

She opened up about a time when she contemplated taking her own life.

Katie quit alcohol last year after she checked into the Priory Clinic for treatment.

Katie opens up about heartbreaking struggle

Before she took the time to seek treatment, Katie says at one point she thought about no longer being here.

The 42-year-old says that it was only reminding herself of her children that stopped her from acting on her thoughts.

She told The Sun: “I can’t imagine not being a mum – it’s what I live for. My kids basically saved my life to be honest.

“I wouldn’t be here if it weren’t for them.

“I wanted to commit suicide last year but the reason I didn’t, every time I’d get close I’d think of my kids’ faces, that’s what stopped me.”

She added that thinking about what Harvey would do helped her keep a grip on reality.

Earlier this year, Katie said that she feels like a “new person” after seeking treatment.

“When I look at it all now I’m like, oh my God, I’m a completely different person now,” she told FUBAR Radio.

“What the hell? I’m actually embarrassed as to how I’ve acted and stuff, but you know, that’s part and part of mental health. You can’t help it.”

Since returning to health, Katie has thrown her energy into doing good.

She told fans on Instagram: “I’m calling on you to support me and Andrew Griffith MP with our new petition.

“I am delighted that Andrew Griffith MP has agreed to support me with my new petition and is to take it to the next level where it so desperately needs to be heard.

“No troll should retain the right to be able to hide behind their abusive malicious posts.”

Katie’s petition is currently live on the government’s petitions website and has over 140,000 signatures.