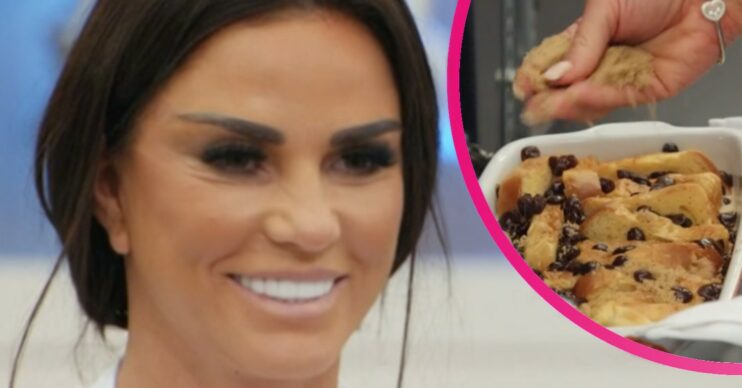 In Katie Price latest – Celebrity Masterchef viewers have shared their disappointment over the former model being booted off the show.

The mum-of-five, 43, was eliminated off the popular BBC show following the quarter-final.

Katie faced off with fellow stars Joe Swash and Dion Dublin for her last task.

She failed to impress the judges with her steak and chips followed by bread and butter pudding.

Why was Katie Price eliminated from Celebrity Masterchef?

Judges John Torode and Gregg Wallace said her take on hollandaise sauce simply “didn’t work” and they were also left unimpressed by her homemade chips.

However, Katie seemed somewhat relieved to be going home, and admitted that it hadn’t been her best effort on the show.

She said: “I feel so good that that is over, because that task there was the worst out of all of them.”

One viewer tweeted: “You know what, I don’t really follow celebrity stuff so only know Katie Price from her “Jordan” reputation from the early noughties. But she seems really grounded on #CelebrityMasterChef – sad to see her go.”

While another viewer shared: “Disappointed that #katieprice didn’t make it through to semi-finals. Well done to Dion. That Joe Swash irritates me, really irritates me. #CelebrityMasterChef.”

And a third user claimed: “Sad for @KatiePrice to leave #CelebrityMasterChef she has such a lovely attitude and spirit.”

A fourth user then argued: “To be honest I fully went into this week on @MasterChefUK thinking I’d be taking the piss out of@KatiePrice
but I feel really bad for her today. Had a great week and just a bad day in the kitchen today. She did well. And she would have gotten through on another day. #CelebrityMasterChef.”

Additional users also argued how well Katie came across on the show.

And another viewer claimed: “Whenever I see #KatiePrice on any program she always comes across as very insecure & vulnerable underneath everything. And actually very likeable #CelebrityMasterChef.”

What’s more, Katie’s appearance on the show comes amid a very rough week for the celebrity.

She claims to have been assaulted at her home and fled to her son Harvey’s home to escape.

A 32-year-old man was arrested and released on bail.