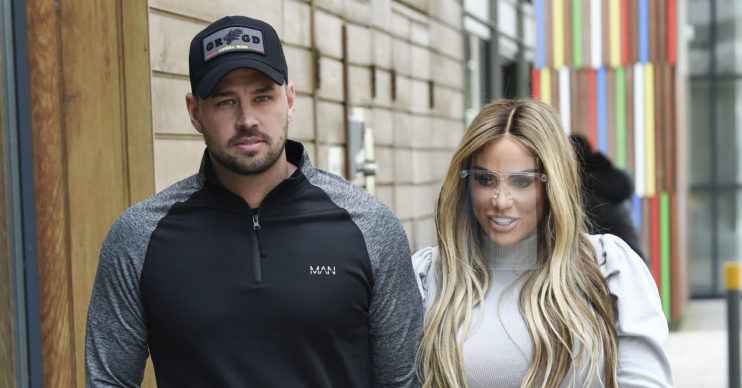 Katie Price latest: Carl Woods jokingly compares her to a CAMEL on trip to safari park

In latest Katie Price news, the star was jokingly compared to a camel by fiancé Carl Woods on a weekend trip to a safari park.

The model and businesswoman, 42, travelled to West Midlands Safari Park with Carl and her three youngest children – Princess, Jett and Bunny.

And it wasn’t long until Carl, 31, took the mickey out of his bride-to-be.

Where did Katie Price and Carl Woods go at the weekend?

Katie posted an image of the happy family as they stayed in their cars at the safari park.

Flashing her gigantic engagement ring, she wrote: “Family day out at another safari with @carljwoods @officialprincess_andre Bunny and Jett.”

Katie also posted some video in her Stories section, which showed the kids feeding animals like giraffes, Ankole cattle and rhinos.

And it was when they drove past some camels that Carl took to his own Instagram account.

What did Carl say about his fiancée Katie?

Taking a photo of the humptastic mammals, he added an arrow pointing to the animal’s mouth.

He also added a caption, which contained Katie’s Instagram handle.

Katie is famous for her lip fillers over the years, and now Carl seemed to poke fun at his fiancée’s plump lips with a comparison to the pouting camel.

What’s the latest on the wedding?

Despite the cheeky jibe, it’s full steam ahead for Katie and Carl when it comes to their nuptials.

With wedding details (including a date) yet to be announced, Katie did say she was planning to change her surname for the first time in her life.

Read more: Katie Price and Carl Woods: Star will change her name for the first time when they wed

She told Notebook magazine: “I have never changed my surname for anyone – but I’m going to change it legally and be known as Katie Woods.