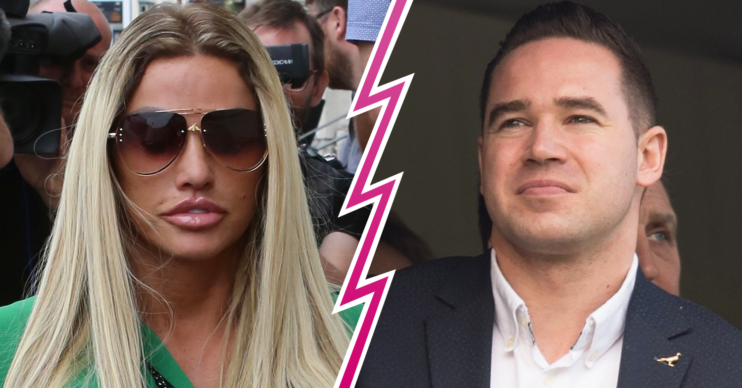 Face-to-face for the first time since she avoided jail

After Katie Price jetted back from her latest trip to Thailand she reportedly found herself face-too-face with ex-husband Kieran Hayler at an event for the two kids they share.

Katie and Kieran are parents to Bunny, seven, and Jett, eight.

However, after Katie violated the terms of her restraining order and allegedly sent abusive messages to Kieran’s fiancée Michelle Penticost, tensions have been strained.

So it was no surprise that a reported reunion between Katie and Kieran earlier this week was “tense”.

Katie Price avoided jail after violating the terms of her restraining order, instead being handed community service.

Kieran and Michelle have since opened up about the verdict.

As a result, Michelle has said the couple have CCTV “everywhere”.

And she’s shared her fears over what “unpredictable” Katie could do next.

Michelle also claimed that Katie turned up at their house unannounced when she was pregnant and said that she “hoped the baby is either born dead or disabled”.

So it’s no surprised that an event Katie and Kieran reportedly had to attend for their two children was branded “awful” by a source.

They claimed to The Sun the pair “didn’t speak the whole time” and alleged Katie “kept shooting Kieran furious looks”.

“Katie and Kieran both had to attend an event for the two children they share. It was awful – Michelle was too worried to attend so Kieran went alone, and Katie had left Carl [Woods] at home too,” the source claimed.

I don’t know how they can get along normally from now on.

“They didn’t speak the whole time and didn’t interact once. I don’t know how they can possibly get along normally from now on. It’s so tense between them.”

A rep for Kieran said: “Kieran continues to focus on what is most important, to ensure his family,  fiancée Michelle Pentecost and that of the children’s best interests and mental welfare are considered paramount above anything else.”