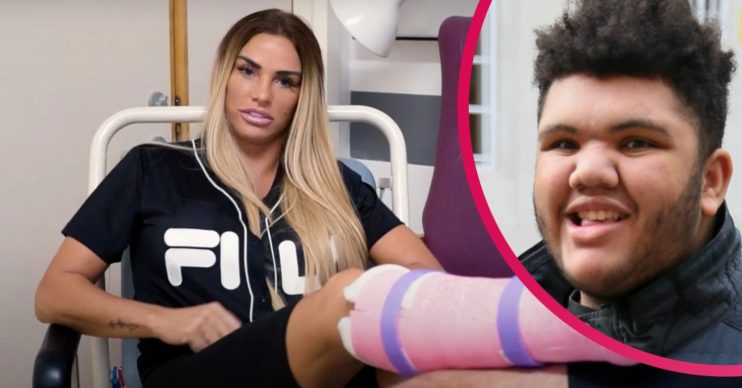 Mum-of-five Katie is still struggling after her accident

Katie Price is in so much pain she struggles to sleep, following her accident in Turkey.

Posting on her Instagram story in the early hours of Saturday (August 22), the former glamour model told her 2.3 million followers about how much the injury has affected her.

She wrote: “Struggling tonight to sleep again despite my feet repairing from my operation. No matter what I do and no matter what painkillers doctors have given me, I’m still in pain.”

What did Harvey say?

She followed it with a crying emoji, which might not actually be far from the truth if her latest post about Harvey is anything to go by.

The 42-year-old mum of five even posted an adorable video on Instagram of her 18-year-old son, Harvey, asking her not to cry.

In the video, her loving son says that he just wants his mum to be ‘fixed’.

Harvey wanted me to film him again bless him .. love him so much and how much he expresses how much he loved his mum he is so cute ❤️❤️

The freak accident took place when Katie was on holiday last month with boyfriend Carl Woods.

When she returned from Turkey, Katie underwent intense six-hour emergency surgery in the UK. It didn’t quite go to plan though, with Katie reporting from hospital there were complications with the procedure.

She posted to Instagram followers: “Wanted to update everyone who has been sending all the beautiful messages to me.

Wanted to update everyone who has been sending all the beautiful messages to me ❤️ so I’ve had my 6 hour op Unfortunately more Procedures was needed when they entered my feet than thought , but I’m lucky I have the chance to one day get on my feet again 👍 Chelsea Westminster hospital nurses doctors have been amazing and the surgeons totally have my up most RESPECT and absolutely FANTASTIC very professional and have been very honest and straight with me to make me actually sink in my head the seriousness of my injuries MASSIVE THANKYOU and massive Thankyou to @carljwoods for constantly fitting me around his work and being by my side , loving knowing I’ve found the man that has surprisingly ticked every box I could only dream of a man to be like and knowing I’m spending the rest of my life with him ❤️❤️

“So I’ve had my six-hour op. Unfortunately more procedures was [sic] needed when they entered my feet than thought. But I’m lucky I have the chance to one day get on my feet again.”

She also paid tribute to the medics at Chelsea Westminster Hospital, saying they made it clear to her the seriousness of her injuries.

In the post, she thanked Carl for being there for her, saying she will spend the rest of her life with him.