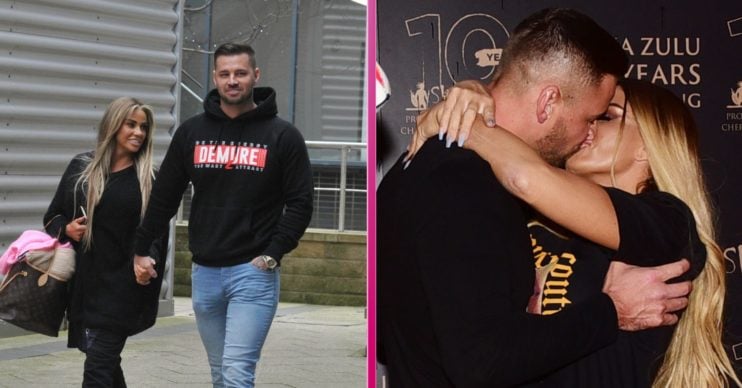 Katie Price is engaged to Carl Woods – how many times has she been engaged before?

Carl Woods put a ring on it!

Glamour Queen Katie Price has confirmed she is engaged to Carl Woods. The pair have only been dating for 10 months but have decided to put a ring on it.

Katie broke the news via her Instagram with a picture to her 2.5 million followers.

In the snap, posed for OK! Magazine, Katie can be seen beaming at the camera alongside Carl as she shows off a sparkling ring.

She captioned the cute snap: “I said yes!”

Who is Carl Woods?

Katie’s latest beau Carl Woods has not been on the scene for long, but it’s clear the pair are head over heels. The entrepreneur has been seen on TV before, as he competed in ITV‘s Love Island in 2016. However, he was never lucky enough to make it into the villa.

Before he entered Love Island, Carl revealed he owns 30 cars in his VT including a Lamborghini.

He described himself as “charming, confident, game, outrageous and irresistible”. He also added: “Being a Channing Tatum look-a-like is a bonus to say the least.

While briefly appearing on Love Island, Carl also revealed that glamour models such as Katie are his perfect type.

During an interview with Closer, he revealed he used to have posters of Katie on his wall: “I’ve known her since I was 15 – she just didn’t know it then. I had about six posters of her on my wall!

“But it’s funny because the reality is even better than the fantasy. In truth, if I’d met Katie a few years ago when she was going through that stage, we wouldn’t have worked out.”

Who has Katie Price been engaged or married to before?

Katie Price is no stranger to walking up the aisle. The former glamour model has had not one, not two but three husbands before.

The 42-year-old first married in 2005, to singer Peter Andre after meeting via ITV’s I’m A Celebrity. The pair were together until 2009 before divorcing. Peter went on to marry his current wife Emily, and Katie remarried herself a year later.

Her second marriage to former fighter Alex Reid was short-lived. The pair married in 2010 but then later split in 2012.

Her last marriage was to partner Kieran Hayler. The pair married in Barbados in 2013, but split officially last year in 2021 after infidelity and fights that were played out in the media.

Who are Katie Price’s children?

Katie Price is a mum of five, from various partners and marriages. Her eldest son Harvey Price is 18, and comes from Katie’s short-lived relationship with footballer Dwight Yorke.

She also has two children from her marriage with Peter Andre. The pair share Princess, aged 13, and son Junior who is 15.

From her last marriage to Kieran Hayler, Katie has two children. Daughter Bunny is aged six and son Jett is aged seven.

However, Katie has made it clear that she and Carl want to try for children soon. There’s even been fresh rumours that she might already be with child, as she appeared to cradle the beginnings of a baby bump recently.

Katie has made no secret of how broody she is. In a YouTube video for her and Carl’s new channel, the pair revealed they had already been looking at getting fertility tests to help them become parents.

What do you think of this latest news? Leave us a comment on our Facebook page @EntertainmentDailyFix.