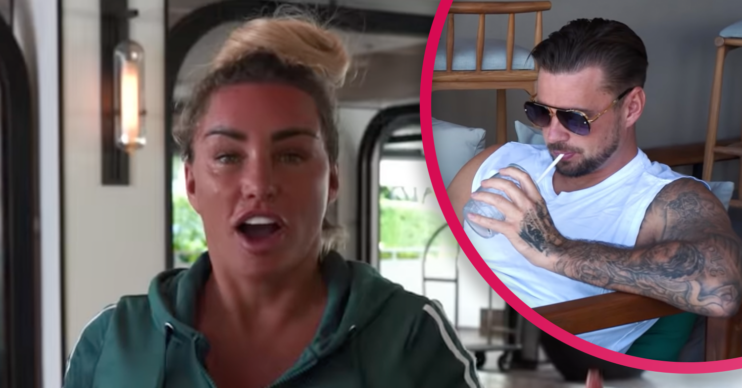 The model joined in too!

Katie Price posted a picture of fiancé Carl Woods on Instagram today (March 18), only for her followers to cruelly mock him.

The couple are currently enjoying the last day of their holiday to Thailand, where they’ve been for the past three weeks.

However, Carl was mocked over his appearance in the picture.

Katie posted a picture of Carl enjoying the last day of their holiday.

In the picture he looks sunburnt and is wearing a white T-shirt with his initials embroidered on.

And it’s the latter that Katie’s followers took aim at.

One said: “Who wears a T-shirt with their initials on it? Is it incase it gets lost at school?”

Another replied: “My son had his on his PE kit.”

“I put my mum’s name in her clothes in her care home,” another offered.

“Note to self: Must buy a T-shirt with my initials on like Delboy and Carl Woods,” declared another.

Other’s, including Katie, also poked fun at Carl’s tan, with the modelling captioning the picture: “Lobster.”

‘Hope you’re having a lush time’

However, some of Katie’s follower’s had Carl’s (doubtless sunburnt) back.

One said: “Why can’t people just be nice ffs!!

“If you don’t have anything decent to say, why follow Katie? Let’s face it, we’ve all got burnt at some point.”

They added: “Hope you are having a lush time both.”

Others offered skin-care advice to Carl.

One said: “Get some aloe vera on him.”

Trouble awaits Katie when she lands back home

Katie appeared to be making the most of her last few hours in paradise.

After all, when she gets home it’s reported that she faces court after being found guilty of harassment.

It’s said the crime could see the model land a sentence of up to five years in jail.