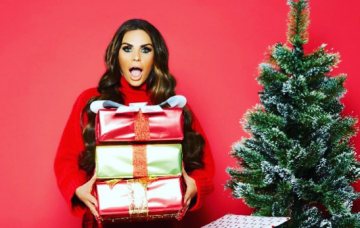 She's going to have a good time and wants us to as well!

Katie Price proved she was well and truly in the Christmas spirit, as she dressed up to spread cheer to her fans.

She posted an image of herself holding presents, standing in a box and next to a bare tree.

Her message read: “It’s Christmas Eve ❤️🎄 wishing you all a very merry Christmas with your loved ones. Love KP.”

It’s Christmas Eve ❤️🎄 wishing you all a very merry Christmas with your loved ones love KP 💗💗💗 pic.twitter.com/rEsVM6HHGp

The mum of five posted her joyful message after a day of drama with her ex, Kieran Hayler.

Yesterday we reported that Kieran had been left on the doorstep after arriving to collect his kids, Jett and Bunny.

He was expecting to have them until Boxing Day, The Sun claimed, but Katie didn’t want to hand them over.

A source told the tabloid: “Kieran tried to contact Katie but she blocked him and refused to let them go, despite their prior verbal agreement that he would have them today and on Christmas Day.

“Kieran was expecting to have Jett and Bunny for Christmas and he is devastated that she’s pulled this stunt on Christmas eve.

“He has never spent Christmas without them and his entire family are all waiting for him to return with the kids.”

At the time a rep for Katie declined to comment, but now she appears to have hit back, via a source.

They told Mail Online: “Katie was always having the children for Christmas.

“He tried to collect them this morning but of course Jett and Bunny will be spending this year at their mum’s with Princess, Junior, Harvey, Amy and the family.

“Kieran has to remember it may also be Amy’s last Christmas so he is acting very insensitively.”

Katie’s mum, Amy, is suffering from a terminal lung condition.

Katie won’t be enjoying a great start to 2019, as she faces a court appearance next month.

Earlier this month she was charged by postal requisition with being drunk in charge of a motor vehicle.

The former glamour will appear at Bromley Magistrates’ Court on January 7.

It follows her arrest on suspicion of drink-driving in south-east London two months ago.