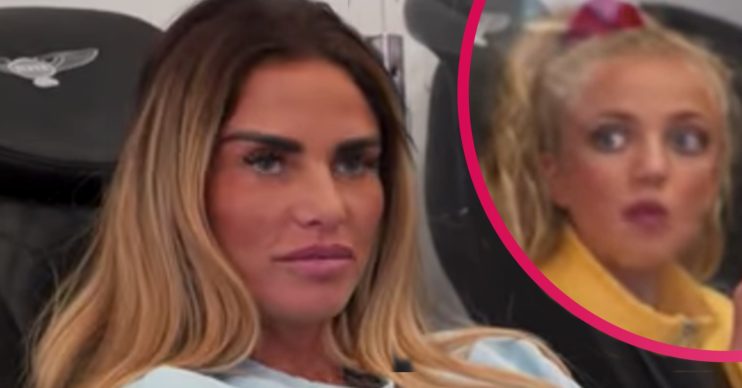 Katie was shocked at the added expenses.

Katie Price has shared her displeasure at Princess and Junior‘s private school charging parents for stationery.

The glamour model turned businesswoman, 42, said she felt the school is taking ‘a liberty’.

The mum-of-five spoke out during one of her latest YouTube videos.

While enjoying a girly day at a nail salon, Katie asked Princess if she needed anything for school.

She sounded off a massive list that included: “HP pencils, ruler, eraser, pencil sharpener, scissors, glue stick, protractor, pair of compasses, scientific calculator, highlighters, colouring pencils – a small selection, and that is all I need.”

Read more: Katie Price says her foot scars look like they’re out of a horror movie

After Katie found out that son Junior would need similar items, she complained about the added costs.

Princess replied: “It is a lot of money.”

Katie continued that she didn’t want her children to end up like “clones”.

She said: “But private school you’d think they supply that. It is a bit of a liberty! But it is! Certain this and certain that. What if you want to be individual? I don’t want you and Junior to be clones. But I don’t!

“Why do you all have to look like clones? When you’re young, that’s when you start your individuality.”

The video comes just days before she re-entered The Priory.

She says she is staying at the health facility to work on her mental health issues as well as recover from her foot surgery.

She told The Sun that doctors told her she is lucky to be alive after she jumped off a wall.

They said she could have been left paralysed or killed. They even said they have had to amputate patient’s legs with similar foot injuries.

Katie also told the paper: “Everything has hit me so hard, not only am I in a wheelchair but I have to learn to walk again and I’m disabled. It’s humiliating.”

She also said she now wants to quit booze for good. She says she had a few drinks just before her shock accident.