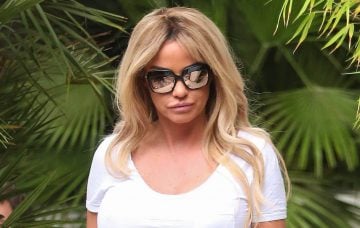 She shared quotes about love, loyalty and rising above drama

Katie Price has shared a string of cryptic Instagram posts about love, loyalty and putting on a brave face.

The mum-of-five went on an Instagram spree, sharing six different quotes hinting at fresh heartbreak and a desire to rise above and move on from whatever may be happening.

Katie shared each of the quotes with no caption, leaving her motivation for posting them unclear.

Her first quote read: “I’m proud of my heart. It’s been played, stabbed, cheated, burned and broken, but somehow it still works.”

Fans were quick to react, with one telling her: “Don’t be fooled again. I met you once and you’re amazing. Be strong, stay strong.”

Another agreed: “Stay strong, you have all our support and love.”

Katie, 39, famously gave third husband Kieran Hayler a second chance in 2014, when it emerged he’d cheated on her with Katie’s best friend.

Then, last summer, Katie accused him of cheating again, this time with their kids’ nanny.

Despite that, Kieran is still living at the family home and it’s unclear what is going on between him and Katie.

She followed that up with a third post reading: “Behind my smile, there’s a story you would never understand.”

A fourth said: “Such a disappointment when you defend someone for so long thinking they are different and they turn out to be just like what everyone said.”

Katie wrapped up with a sixth post reading: “Actually, I just woke up one day and decided I didn’t want to feel like that anymore or ever again. So I changed. Just like that.”

Katie then changed tact, posting a photo of her daughter Bunny, three, before heading to a charity football match with her eldest son Harvey, 15.

The star has made no reference to the cryptic posts or why she shared them.

She’s had an incredibly difficult previous year: as well as dealing with her husband’s betrayal, Katie then got the devastating news her beloved mum Amy has been diagnosed with a terminal lung condition.

On top of that, she’s dealt with vile trolling of son Harvey, who has multiple disabilities, and has been campaigning parliament to introduce stricter laws about online abuse.

She also flew to Belgium earlier this year for a mini face-lift, to correct an earlier thread face-lift, which knocked her confidence and led to her appearance being mocked.

The star recently told OK! magazine: “Last year was one of the most stressful years I’ve ever had and there are things that happened which people don’t even know.

“My next book is going to be unbelievable. There’s some horrible stuff that’s happened. I deserve this year to be a good year after what I’ve been through.”

Katie has also been filming a new series of her Quest Red reality show, Katie Price: My Crazy Life.

She said: “There’s always drama in the Pricey household and I think this year might well be the craziest yet so I had to do another series of My Crazy Life with Quest Red!

Her reality show commitments are the reason why Katie’s been missing from Loose Women in recent weeks, but the show has confirmed she’ll be back on air as soon as her schedule clears up a bit.

Will you watch Katie’s new reality show? Do you miss her on Loose Women? Leave us a comment on our Facebook page @EntertainmentDailyFix and let us know what you think!