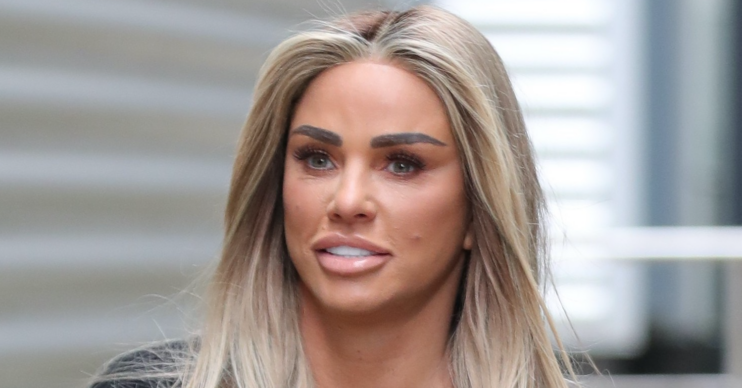 The former glamour model was previously arrested and charged for drink-driving after a car crash in September.

Now, Katie has been handed a suspended prison sentence for the incident.

The mum-of-five arrived at Crawley Magistrates’ Court without her engagement ring this afternoon.

Katie had previously pleaded guilty to drink driving while disqualified and without insurance following the crash.

During today’s hearing, the court heard that a witness managed to remove Katie from her damaged car at the time.

The star had fallen into the passenger seat as the car was on its side.

According to the prosecution, Katie had consumed cocaine, vodka and lemonade before the crash.

Defence barrister Joe Harrington told the court: “This is a lady with an awful lot going on.”

District Judge Kelly went on to sentence Katie to a 16 week prison sentence, suspended for 12 months.

In addition, the star will have to undergo 100 hours of unpaid community work.

This is a lady with an awful lot going on

Her driving ban will also remain for two years.

The judge told Katie: “I cannot send you to jail today even though you may deserve to spend Christmas behind bars.

“You are extremely lucky the magistrates on a previous occasion decided to defer their decision.”

The reality star was arrested in September after being involved in a drink-drive car crash.

She later checked herself into rehab facility The Priory.

During her rehab stint, Katie’s family released an emotional statement on her behalf.

Her mum Amy said: “She could have killed herself or someone else’s child. I don’t hide from that and neither does Kate.

“My daughter is mentally unwell.

“We have no idea what the future holds but what we do know is Kate’s children will read and see every article written.”