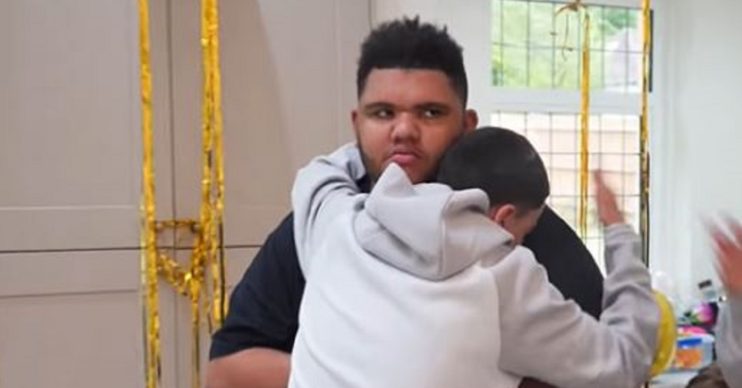 Such a beautiful gift

Fans of Katie Price were left feeling emotional after seeing her son Harvey play the keyboard and sing as a special birthday surprise for his younger brother, Junior.

And earlier today (Sunday, June 28), Katie shared a YouTube video showing fans exactly how they all celebrated his big day.

What happens in the video?

At one point in the video, a preview for which she shared on Instagram, Katie, Harvey and Junior’s younger siblings Princess, Jett and Bunny all sing him happy birthday.

Talented Harvey sits at his keyboard all the while, playing out the melody to the iconic tune.

Reacting to the clip in the comments on her YouTube video, fans were emotional – particularly after Junior’s heartwarming reaction to Harvey’s performance.

When they finish singing, Junior goes around the room thanking his mum and siblings individually.

As he gets to Harvey, he showers extra praise on the 18 year old, telling him after hugging and kissing him: “Harvey, thank you so much. That was amazing! That was amazing.

Reacting, one fan said: “I literally cried at how lovely Junior is with Harvey and vice versa.”

Another wrote: “Great video, Junior is such a great brother. I’ve got two autistic children and seeing how Junior is with Harvey made me feel so emotional.”

A third put, alongside a string of tearful emojis: “The way junior treats his siblings melts my heart.”

“Harvey is too cute,” said another emotional fan.

It’s not the first time Katie’s followers have noticed how much of a good brother Junior is to Harvey.

Last month, for Katie’s birthday, she filmed herself having fun and playing games with her kids.

And fans noticed how keen Junior was to make sure that Harvey was included in everything they did.

Read more: Peter Andre admits he is ‘stressing’ about Princess becoming a teenager

People have showered Katie with positivity on her YouTube channel, but she’s no stranger to trolling on social media, particularly on Instagram.

A video she posted of her daughter Bunny on the picture-sharing platform this weekend came under fire, as it featured her wearing make-up.

People were quick to criticise Katie for letting the six-year-old use lipstick and blusher. Others defended the star and said Bunny was simply playing dress-up. A source close to Katie explained that her youngest daughter loves to copy her make-up tutorials.

What do you think of Junior’s birthday video? Leave us a comment on our Facebook page @EntertainmentDailyFix and let us know.