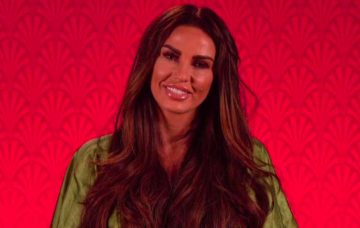 Katie Price has got her fans talking after posting a picture of herself kissing a newborn baby on Instagram, while hinting she would like another of her own.

The cute tot in the picture is her friend’s daughter Darcy, who the former glamour model has been asked to be godmother for.

The delighted mother-of-five said of her new role: “You can’t beat a real love like with your goddaughter. Thank you @rosieboys and @jamesbpmboys for believing I’m perfect for the job.”

She captioned a second snap “real true cuddles” but it was a third that got her followers worked up as she commented beside it: “I love babies can’t wait for my next one,” following by smiling face emojis.

Her comment got some of her fans wondering if she was expecting again.

“You are pregnant? Congrats,” wrote one.

“Does this mean baby no.6 may be on the way soon?” asked another.

The remark also prompted some to post disparaging remarks about the reality TV star, with some saying she’s “too old” to have at sixth child at 39. This led others to leap to her defence.

“She’s a good mum, you can’t take that away from her,” one fan wrote.

“Some of the comments on here! So rude. What’s wrong with having a baby at 40? I’m expecting my second child aged 42!” said another.

A third said: “She does an amazing job looking after her kids. Why shouldn’t she have anymore it’s not like she expects the state to keep them.”

The debate left others wondering what all the fuss was about, as they believed Katie was clearly joking as she posted the laughing face emojis after her original comment.

“Omg i think she was joking!!!” wrote one, adding: “Jeez, what has it got to do with us anyway. If she decides to have more that’s her business.”

Katie has previously been outspoken about her desire to have more children as she loves being pregnant and being a mum.

“You could say I’ve got [an addiction to having babies] because I still want more – I know for a fact I haven’t had enough. Once you’ve had your last one, you feel like you want another one,” she said on Loose Women last year.

On another occasion on the show, Katie also said she had all their names planned, wanting to continue a royal theme after already having Princess.

“I want Royalty, then Prince, then King, then Duchess. I’ve got them all named, I don’t know how many more I am having!” she revealed.

Katie is currently filming the second series of her reality show My Crazy Life, which will chart her recent surgery procedures, her parliamentary fight to get “Harvey’s Law” passed to combat online trolling, and her support of her mum, Amy, who has a terminal lung condition.

Do you think Katie will have a sixth baby? Leave us a comment on our Facebook page @EntertainmentDailyFix and let us know what you think!