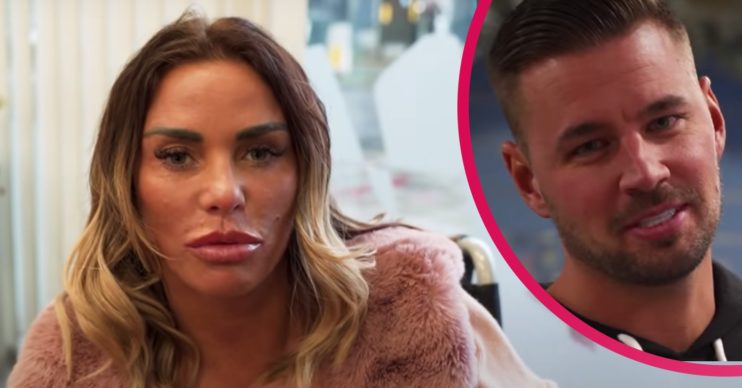 She's opened up about their 'connection'

Katie Price has hailed her bond and ‘conversations’ with beau Carl Woods.

The former model opened up about her feelings as she shared a snap of the pair cuddling in bed.

She gushed over her 31-year-old fella in the caption of an image, which showed them looking lovingly into one another’s eyes.

“No matter where we are together our conversations and connection we have for each other is totally something I’ve never experienced!” Katie wrote.

The angle of their embrace also meant Katie’s tattoo of Carl on the inside of her right arm was visible.

I definitely think Carl is sincere and they have a great connection.

Thousands of fans gave their approval to the image by giving it a ‘Like’.

“Lovely to see you so happy,” commented one well wisher on the pic.

“Really good to see you looking so happy and radiant. You make a great couple,” remarked another Insta user.

And a third person responded to Katie’s word by writing: “I definitely think Carl is sincere and they have a great connection.”

However, not everyone was impressed by the social media PDA.

“Don’t really want to see you both in bed together,” someone else complained.

“We want to see you with your kids more.”

Several other commenters, meanwhile, pondered who was behind the camera to capture the moment.

Carl is reportedly keen to propose to Katie, 42 – but told The Sun he will wait for her son Junior‘s blessing.

“When I’m gonna ask Kate to marry me, I will ask Junior’s permission, and that will be important to Junior,” Carl told the newspaper.

“I’ve always said that to him when me and Junior have spoken about it.”

The teen recently teased his mum in a video upload to her YouTube channel by joking she is a “gold digger”.

Reflecting on how Carl had spoiled her with a pair of Louis Vuitton trainers, the 15-year-old indicated his mum’s man regularly splashes out.

Junior joked: “People saying Carl is gold digging on mum, it’s the other way around.

“I can’t remember the last time Carl let mum pay for anything.”