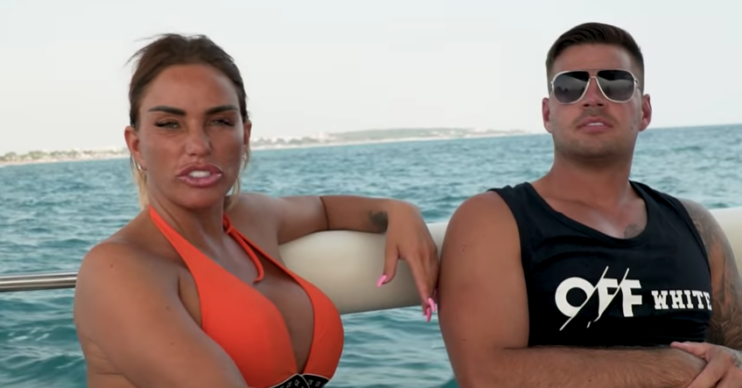 Katie Price has slammed reports her boyfriend Carl Woods “is using her” for fame.

The mum-of-five hit back after fans noticed the former Love Island star failed to assist her in her wheelchair during a YouTube video from their Turkey holiday.

But after articles circulated online over the incident, Katie rushed to defend her man in a scathing post on Instagram Stories.

Sharing a screenshot of an article, Katie, 42, fumed: “Total 100 percent made up story. Why are you writing absolute rubbish about me and my boyfriend @carlwoods.

“The truth is @carlwoods is looking after me impeccably and is amazing!”

During the YouTube video, Katie was spotted struggling as she attempted to manoeuvre herself from her wheelchair to the restaurant seating area.

She later hoisted herself up with the help of 15-year-old son Junior as Carl asked workers for the venue’s WiFi password.

The scene left many fans questioning why Carl wasn’t on hand to assist.

One pointed out: “Her fella should’ve helped her into the seat there, I was a bit annoyed that he didn’t. My fella would be carrying me around if he could, Jr helping his mum like a gentlemen. Love you Katie get well soon.”

Another said: “He was more concerned about getting the WiFi password. I can’t stand him. Bad vibe.”

A third added: “The new boyfriend has bad body language signals on camera. I really hope he doesn’t use Katie to further his career.”

Read more: Sam Bailey scared of being in the ‘firing line’ as she offers pal Katie Price ‘help’ after accident

Later on in the video, Carl pushed Katie in her wheelchair following a day out on a boat.

The family were filmed walking through the streets before they all stopped for ice cream.

As he pushed Katie’s chair, Carl commented: “It’s a workout pushing her everywhere!”

The task was also taken on by Junior, who jokingly neglected his mum while in a car park.

What’s the latest on Katie Price?

After flying back to the UK to receive medical treatment, she underwent a gruelling six-hour operation to help with her injuries.

The reality star took to Instagram to update fans over the weekend, sharing an image that showed her in a hospital recovery room.

She wrote: “Wanted to update everyone who has been sending all the beautiful messages to me.

Read more: Katie Price still ‘in talks to appear on Dancing On Ice’ despite feet injury

“So I’ve had my six-hour op. Unfortunately more procedures were needed when they entered my feet than thought, but I’m lucky I have the chance to one day get on my feet again.

“Chelsea Westminster hospital… nurses… doctors have been amazing and the surgeons totally have my upmost RESPECT and are bsolutely FANTASTIC.

“Very professional and have been very honest and straight with me to make me actually sink in my head the seriousness of my injuries MASSIVE THANK YOU.”