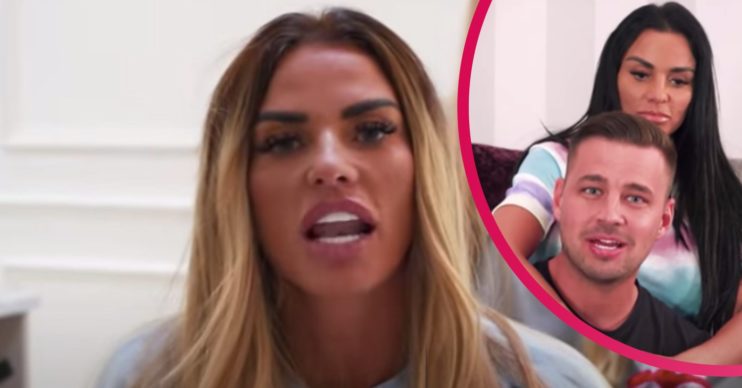 Katie Price says trolls online can be so 'cruel'.

Katie Price has hit out against ‘cruel’ online trolls and defended her new relationship with Carl Woods.

The mum-of-five, 42, says she and her new man don’t deserve online abuse.

She also praised the car dealer, 31, for staying loyal throughout her ‘life-changing’ foot injuries.

Taking to social media, Katie shared a photo of Carl dutifully pushing her in her wheelchair after she broke both her feet in Turkey.

Katie Price says she and Carl Woods are the real deal

Sharing in view of her two million plus Instagram followers, Katie wrote:

“I’ve heard every bit of abuse, insults and hurtful [bleep] naming calling under the sun from people who haven’t met me nor @carljwoods, I’m sick of small minded trolls trying to put us down.

“I’m not a [bleep] I NEVER slept around being called a [bleep] is infuriating and cruel.

“There isn’t many guys that would be able to handle the life-changing injuries I have. Just be happy for me for once, I deserve it.”

Katie’s plea for kindness was met with dozens of well-wishes from her fans.

She’s had enough of being mocked online

One user praised Katie with: “Don’t listen to them Katie, let them be miserable, look how far you’ve got! Amazing.”

And another user gushed: “I actually don’t know how you cope, I have loved you from the beginning! Hope you recover, lots of love.”

A third user shared: “You’re one of the most courageous, beautiful and kind-hearted people out there.

“Anyone who hates is jealous and vile. Keep being awesome, being a fab mummy and doing what you want.”

Carl and Katie are believed to have fallen for one another during lockdown.

They took their first holiday together to Turkey in July.

Unfortunately here Katie broke both of her feet – and is now wheelchair-bound.

She has said she may not be back on her feet properly for up to two years.

But she’s trying to take it in her stride, and had a hot pink mobility scooter and matching wheelchair commissioned.

On their trip they also had ‘his and hers’ veneers fitted.

Carl competed on Love Island in 2016. He arrived as one of the ‘bombshells’ but never made it inside the villa.

Katie just announced they are launching a travel channel together.