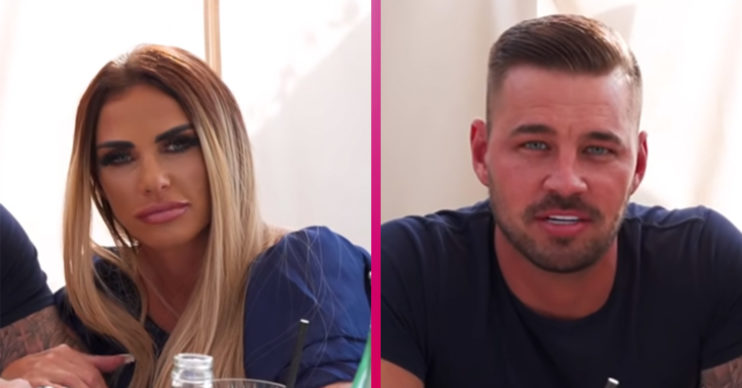 According to reports, Katie has been craving ice cream recently and there’s “a chance she could be pregnant”.

A source told the Mirror: “They’ve already discussed having babies and she even bought ovulation tests to track her cycle, which embarrassingly were found by Princess.

“Katie has been saying for the last few days that she’s craving ice and thinks there’s a chance she could be pregnant.

“Katie says she isn’t getting any younger and still wants lots more children.”

Meanwhile, Katie’s spokesman told The Sun: “Katie and Carl have made no secret of their plans to start a family, naturally there is great excitement, speculation and momentum around this currently.”

The couple have previously said about potentially having a child together.

Katie and Carl have made no secret of their plans to start a family.

What did Katie Price and Carl Woods say?

In the YouTube footage, Katie and Carl showcased their latest shopping buys.

They showed off an ovulation kit, pregnancy test, as well as a candle called ‘Wedding Day’.

Katie later said she had brought the kit because of ‘discussions’ they’d had off camera.

Read more: Katie Price ‘plans to have baby with Carl Woods as she wants a fresh start’

Katie added: “For the same reason you said, because of our discussions we’ve had.”

Carl said: “Our discussions about having kids. This is important because if you’re coming to move in, we’re taking steps.”