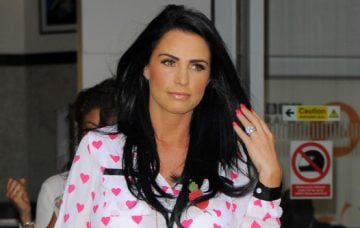 Katie Price may have a new boyfriend now, but it could be some time before she finally buries the ashes of her marriage to Kieran Hayler.

There’s been no love lost between the former model, 40, and her ex-husband since they broke up, and Katie took another swipe at Kieran, 31, on Instagram today.

The Loose Women star responded to newspaper reports that she’d been visited by bailiffs this week, by blaming one of Kieran’s mates for sending them to her house.

It was reported in The Mirror yesterday that Katie had been visited by debt collectors after failing to pay an electrician who’d done some work at her West Sussex mansion last year.

The story said Paul Bean had been to a county court in a bid to claim £3,000 he said was owed to him, and that’s when the bailiffs were dispatched to collect the money.

It was claimed that the mum-of-five was given an ultimatum – either pay up or lose some of your household possessions.

Well, Katie is clearly less than pleased by the visit, and has taken to social media to express her annoyance.

She wrote on Instagram: “A lovely friend of Kieran’s sending bailiffs to my house for work he had done for Kieran.”

And suggesting that she’d paid the bill, she added: “Pricey pays for him again!”

Katie will be seen letting loose on her ex-husband again in Monday night’s episode of her Quest Red show Katie Price: My Crazy Life.

She reveals how ‘disappointed’ she was that Kieran didn’t come to support her in South Africa after she and two of her kids were carjacked by criminals during a visit there.

“After we were robbed, I was a bit disappointed that, when I spoke to Kieran, he didn’t give me the reaction I wanted,” she says on the show.

“I would have got on that first flight out there and flown to see my other half.

Katie and Kieran got married in 2013, but split up following revelations that he had cheated on her. Katie is now dating personal trainer Kris Boyson, 29.