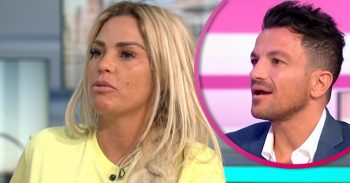 She made the confession on Good Morning Britain today

After turning up late to her live interview on Good Morning Britain, Katie ended up blasting her ex-hubby after GMB host Piers Morgan grilled her about her past partners.

The 40-year-old’s confession came after what was a bizarre and haphazard interview due to her arriving on set so late.

After an awkward interview, where Katie told her mum Amy to “shut up moaning” before realising they were live on air, Piers asked the former glamour model who her “worst” ex was.

Piers and co-host Susanna Reid appeared shocked, while Susanna gave Piers a telling off for asking the controversial question.

Katie also insisted there was no ongoing legal case about their children; Junior, 13, and 11-year-old Princess.

She shouted out during the chat: “By the way, there’s no legal case on anything. Just thought I’d clear that up.”

When Pete, 46, appeared on GMB last month, he said he couldn’t talk about their children for legal reasons.

Minutes before her Pete bombshell, caused havoc when she ran onto the GMB set late.

Wearing tracksuit bottoms and no make-up, Katie sat down next to her mum Amy, who was already being interviewed, and apologised.

Oblivious that they were already on air, she blamed her tardiness on the bad “traffic”.

After she failed to turn up on time, Piers and Susanna had been forced to extend previous interviews and go to extra ad breaks.

Kate’s confession about Pete, who she divorced in 2009, comes after she blasted him during her last GMB appearance.

While on the breakfast show last month, the mum-of-five called Pete a “hypocrite”, claiming he wouldn’t let their children appear on her reality show, My Crazy Life.

Ent Daily has contacted a rep for Peter for comment on this story.

Leave us a comment on our Facebook page @EntertainmentDailyFix and let us know what you think of Katie’s comments.