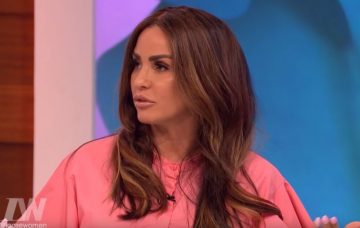 Katie Price has voiced her disgust at the Christmas jumper that has mocked her disabled son Harvey, however, some fans have accused her of having double standards.

After a jumper emblazoned with Harvey’s face, and the caption “Ho, Ho, Hello you (BLEEP)” surfaced online, Katie tweeted: “Why do people continue to mock my son , if these people met Harvey they would feel disgusted!”

Why do people continue to mock my son , if these people met Harvey they would feel disgusted! https://t.co/R19SFzTU4l

But some fans argued that it was a different story for 40-year-old Katie when a flag with a similar message on it was put up by a camper at Glastonbury festival in 2016.

One follower tweeted: “I’m a lil confused how an Xmas jumper is offensive but a flag at Glastonbury is something you were so proud of (?) Not saying it’s right, but if the seller of the jumper could agree to donate the ££ to charity for bully victims or disabled children then can we forgive him?” 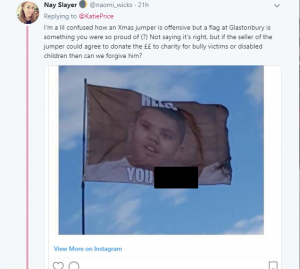 Another agreed, replying: “I completely agree. I think both are disgusting but are being used by Katie in two different ways. I hate that Harvey is in the middle of this but I get a really bad ‘any publicity is good publicity’ feeling from the whole debacle.”

A third commented on the sellers of the jumper: “They were waiting to see which way she would swing this time and if she wanted to make money out of it, or gain publicity like she did with the flags.”

Read more: Katie Price given court date after being charged with driving offence

In 2016, after the flag was brought to Katie’s attention, she tweeted: “So proud my son Harvey’s comment to trolls and bullies has made it on a flag at Glastonbury.”

Last year, merchandise including T-shirts and mugs were made with Harvey’s face and the caption “Hello you (C-word)” and flogged online.

The marketing move was made after Harvey said the comment live on Loose Women while appearing with his mum for an anti-bullying campaign.

The 16-year-old suffers with Prader-Willi Syndrome, ADHD and blindness.

The mum-of-five has also had plenty of people on her side after the incident.

Celeb pals including TOWIE’s Chloe Sims reached out to console her, tweeting that the jumper culprits are “Absolute scumbags 🤬”.

Hollyoaks actress Tamara Wall added: “This is truly disgusting !! I pray their own children don’t ever get mocked in this way. Sending love to beautiful Harvey !”

ED! have contacted a representative for Katie for comment.

What do you think of Katie’s reaction? Leave us a comment on our Facebook page @EntertainmentDailyFix and let us know what you think.