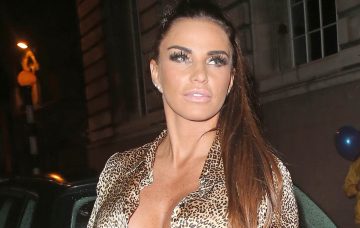 Fans have begged Katie Price to disable her son Harvey’s Instagram comments after he was cruelly mocked by online trolls.

The nasty comments came after 16-year-old Harvey’s account, which is run by Katie, showed a picture of him holding a drawing of his mum on the Gatwick Express.

It was captioned: “Love drawing me and mummy and Gatwick express.”

Love drawing me and mummy and Gatwick express 👋

Many praised the sweet picture but after lots of unkind comments, fans pleaded with Katie, 40, to disable the account’s comments section to stop Harvey being ridiculed.

One wrote: “Please don’t allow people to comment- protect him.”

A second added: “I agree with what someone else said switch off the comments option, it’s not fair that he should take this abuse, please protect him from it, good work Harvey you’re a star.”

A third commented: “Katie is allowing this!! She knows people will slate him and I believe it’s to prove a point!! It’s not fair and comments should be disabled.”

Harvey is partially blind, autistic and has Prader-Willi syndrome.

Katie has been fighting tirelessly for “Harvey’s Law”, which, if passed, would see online trolls prosecuted for their verbal abuse.

She began a petition to make trolling a criminal offence and it received over 220,000 signatures last year. MPs also acknowledged that online abuse should be made illegal last month.

Read more: The One Show viewers shocked by guest’s disgusting comment about husband

Speaking in parliament last year, Katie said: “I know I’m here because it started off because Harvey and his disabilities but this isn’t just for people with disabilities. It will help everybody.”

Earlier this month, the-mum-of-five spoke on her plans to move Harvey into residential care at his school as it has become harder to look after him full-time at home.