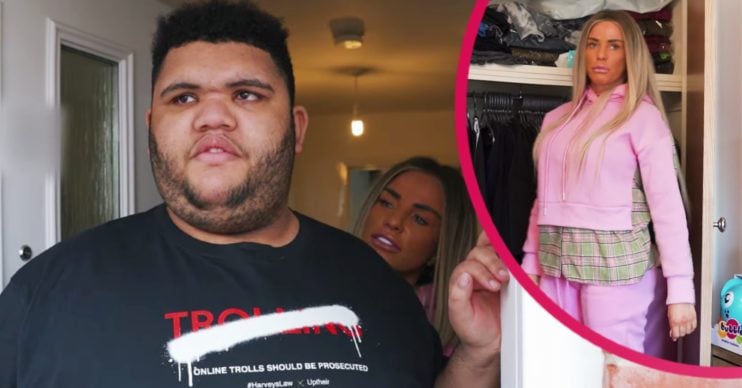 Katie isn't too far away!

Katie Price and her son Harvey have given fans a guided tour of his new home, as he prepares for residential college.

The 42-year-old reality star recently she’d got the pad for her disabled son to help with his big move in summer.

The modest three-bedroom property is directly opposite Katie’s own home.

Katie opened up on the purpose for the pad on her YouTube channel.

She explained: “This isn’t where we live this is where Harvey lives ready for his transitional move to college.

“So this is quieter for him, he gets used to his own space and there’s obviously room if I stay here and we’re only over the road.

“And he absolutely loves it.”

Furthermore, Katie has taken a series of precautionary steps to ensure Harvey, 18, isn’t at harm.

As well as fitted cameras, the star has her own bedroom.

The fridge is also filled with essentials to help the teen lose weight.

Harvey suffers from a range of conditions, but one of them – Prader–Willi Syndrome – causes sufferers to constantly feel hungry and overeat.

Katie explained: “As you can see there’s not much in there he can eat in the night.

Obviously there’s room if I stay here and we’re only over the road.

“He’s got his washing machine, dishwasher, everything you need to be independent.”

When asked if he loved his home, the teen replied: “Of course Mummy!”

Why was Harvey rushed to hospital?

The video comes days after Katie revealed that Harvey is home after he was rushed to hospital.

The 18 year old was taken into hospital following a bad reaction to the COVID-19 vaccine.

Harvey had his first dose of the Oxford/AstraZeneca jab last week as he qualifies as a vulnerable individual.

However, according to reports, he started “shaking uncontrollably” following the vaccine and had to go to hospital.

Taking to Instagram, Katie said: “Where did Harvey go last night?” to which Harvey replied: “Hospital.”

She continued: “What did you have the day before yesterday? You had an injection.”

The star added: “So Harvey is home, safe and he’s on form today. Harvey’s all good.”

Following the vaccine, Katie praised Harvey for being “so brave”.

Speaking to The Sun, the proud mum said: “It’s felt strange being in a school hall with everybody sitting on chairs in rows a metre apart.

Read more: Katie Price declares she is ‘disabled for life’ after breaking her feet on holiday

“Harvey was the youngest we saw there it was all smoothly calmly and professionally done, Harvey was so brave and it was over so quick everybody so helpful.”

Meanwhile, earlier this week, Harvey thanked NHS doctors and nurses after he received his vaccination.

The teen wrote a heartfelt note as he praised them for doing a “good job”.