Mum-of-two Katie Piper was hospitalised on Mother’s Day after sustaining a nasty cut to her arm.

The 35-year-old kept her 850,000 Instagram followers updated with the treatment she received with a series of short posts on the social media site’s Stories functionality.

The ex Strictly Come Dancing celeb dramatically revealed she ended her weekend with a trip to A&E before explaining she had suffered an accident with a glass.

"The downside of being blind in one eye is no peripheral vision, which means you don't notice the drinking glass by the side of you," she wrote in her second post. 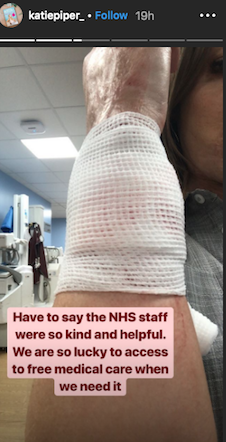 She was grateful for the treatment she received in A&E (Credit: Instagram @katiepiper_)

Katie then shared an image of her right forearm with heavy bandaging around the wrist.

Thanking those who cared for her, she continued: "Have to say the NHS staff were so kind and helpful.

We are so lucky to access to free medical care when we need it.

"We are so lucky to access to free medical care when we need it."

The TV personality from Hampshire also added she had received stitches for the wound - but suggested the injury would not cause her any serious problems in the future. 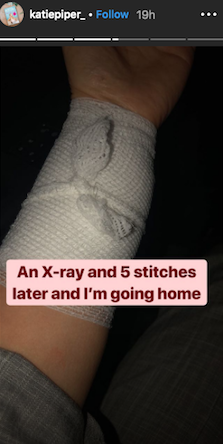 "An X-ray and 5 stitches later and I’m going home," she noted.

However, presenter Katie was particularly grateful her ability to use social media via her mobile was not affected by the gash.

She pondered: "Is it really bad that I'm thrilled it was the left hand and not the right one so I can still use my phone?" 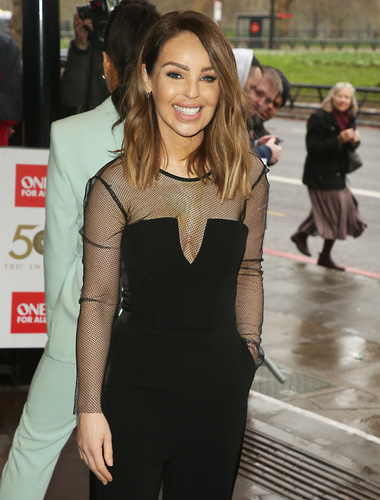 Katie was glad to be able to still use her phone (Credit: Brett D. Cove / SplashNews.com)

Katie was most recently seen on TV in Channel 4’s Famous and Fighting Crime, which saw five celebrities join the ranks of Britain's volunteer special constables.

She was called in to help prevent a man with PTSD from shooting himself during her stint on the programme.