The brave star opens up

Katie Piper has always been very honest about how the scars from her acid attack have affected her.

And now she’s said that her daughter, Belle, three, is asking more questions the older she gets.

In a chat with Sunday People’s Love Sunday magazine, Katie said: “She mainly asks about my hands. I just tell her I was burnt when I was younger, it did hurt, but it doesn’t now.”

Katie was left with third degree burns when her ex-boyfriend Daniel Lynch arranged for an accomplice, Stefan Sylvestre, to attack her with acid ten years ago.

She was also left blind in one eye.

The former model said of her eldest child: “All she really says is, ‘Be careful of your other hand’ when I’m near the oven. But if she asks how I was burnt, I’ll tell her the truth.”

As well as all her TV appearances and book writing, Katie – who recently gave birth to a second daughter, Penelope – is also head of The Katie Piper Foundation, which is a charity that helps people with burns and scars.

She told the website how she rebuilt her confidence when there were days she couldn’t face herself after the attack.

She revealed:  “There were times when I hated parts of myself. I hated the scars and the loss of the control over how I looked. But I always tried to keep positive and work on the parts I could control, to accentuate my best bits.

“We all have parts of ourselves that we like more than others, whether it’s your hair, your great sense of humour or your long legs. I tried to look at what still I had and not what I had lost.” 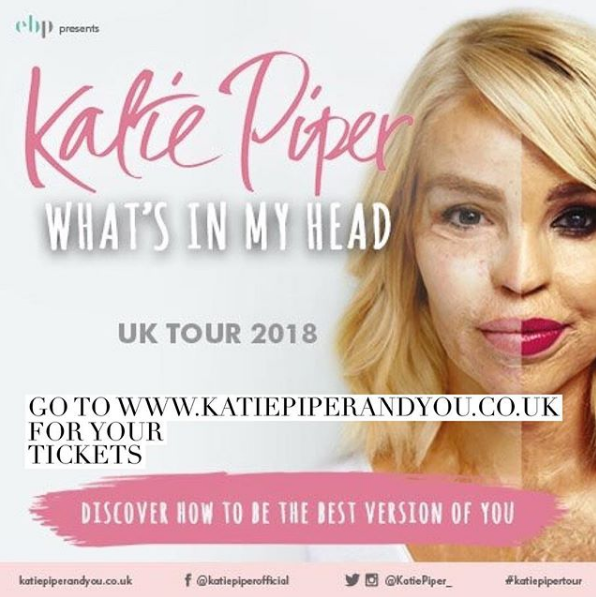 Katie is also off around the country in March for her first ever theatre tour, What’s In My Head, where she will be sharing her stories with the audience.

She will speak about what helped her to stay positive in the darkest of times, as well as opening up about the anxiety battles she faces every day.

Will you be watching Katie on tour? Leave us a comment on our Facebook page @EntertainmentDailyFix and let us know.

Tickets for Katie Piper: What’s In My Head are available at venue box offices and through Katie’s website www.katiepiperandyou.co.uk