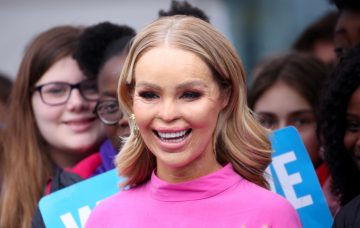 Katie Piper’s acid attacker is being considered for parole as the presenter prepares to debut on Strictly Come Dancing.

The Parole Board said on Friday that a panel is expected to make a decision in “the coming weeks” over Stefan Sylvestre, who has spent nine years in jail after receiving a life sentence.

Sylvestre left Katie partially blind, with severe scarring to much of her body after throwing sulphuric acid at her face on the orders of her former partner in 2008.

Ten years after surviving that attack, Katie, 34, is preparing to appear on the BBC show, which is expected to air next month.

Daniel Lynch, an obsessed fan who had a brief relationship with Katie, ordered Sylvestre to attack her with acid in 2008.

After a trial the following year, Lynch was jailed for life with a minimum of 16 years at the age of 33.

Sylvestre, then 20, received life with a minimum of six years.

A Parole Board spokeswoman said: “We can confirm that a panel of the Parole Board has considered the parole review for Stefan Sylvestre and expect to receive the panel’s decision in the coming weeks.

“We are unable to comment further on the individual details of this case.”

Katie is now a best-selling international author, inspirational speaker, TV presenter and charity founder, who has worked tirelessly to support other burns victims and announced her role on Strictly last week.

She launched The Katie Piper Foundation following her ordeal, an organisation which aims to create a world where scars do not limit a person’s function, social inclusion or sense of well-being.

The foundation works with burns survivors throughout their recovery.