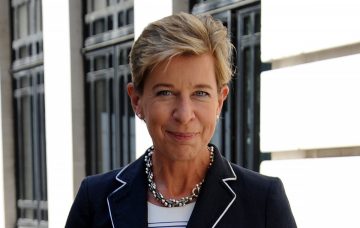 Katie Hopkins files for IVA after lawsuit over tweet

Katie Hopkins has been forced to file an Individual Voluntary Arrangement to deal with her debts after losing a libel case against writer Jack Monroe.

Jack sued the right-wing commentator after she posted a tweet that implied she had been involved in vandalism.

The tweet – which was directed at Jack, read “scrawled on any memorials recently? Vandalised the memory of those who fought for your freedom. Grandma got any more medals?”

Jack responded immediately, saying that if Katie made a donation to a migrant rescue charity and publicly apologised, she wouldn’t sue.

After her request was refused, the food writer filed a suit against her citing defamation.

The court ruled in Jack’s favour in March of last year, ordering Katie to pay a bill of £107,000.

But after more controversial tweets led to the commentator losing work, finances seemed to become a strain, leading to her putting her luxury Exeter home on the market in February.

And now, according to a series of tweets by Jack, she has had to take further steps to avoid bankruptcy.

“I can confirm today that following that landmark libel case, Katie Hopkins has entered into an IVA to avoid bankruptcy,” she said. “I knew for a while but could not say anything for legal reasons.

“The arbitrary defender of free speech didn’t want anyone to know, ironically…”

Jack went on to say that Katie had paid them the settlement she owed, but was still managing other debts.

“I have been paid in full, but many of her creditors, including my lawyer, will not be paid what they are owed,” they said.

“For the want of an apology, a house, a job, a column, a radio show, and now financial solvency, were lost. It’s all very sad, actually.”

Jack stressed that she took no joy in Katie’s position, saying that the case cost her “18 months of sanity and work”.

In fact, she had offered to wipe the debt if Katie agreed to have dinner with her and have a conversation – but she rescinded this after Katie was rude about her in the press the day after!

Jack has now suggested that she may be able to help with budgeting – quipping that Katie might find her budget cookbook, Cooking On A Bootstrap, useful.

Meanwhile people on Twitter are resurfacing a tweet that Katie posted talking about people in debt only having themselves to blame.

Katie has yet to publicly comment on the claims.

Do you think Katie could have avoided the lawsuit? Leave us a comment on our Facebook page @EntertainmentDailyFix and let us know what you think!