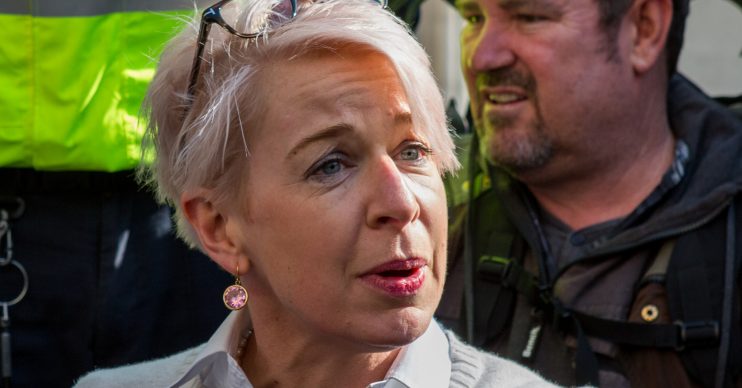 Caroline died at the weekend

Katie Hopkins has been slammed by Twitter users over what they called a ‘hateful’ tweet when referring to Caroline Flack.

The former Love Island host tragically died at the weekend, aged 40, and the news caused shock and heartbreak among her many fans and celebrity pals.

Many began to use the hashtag #CarolinesLaw in the wake of Caroline’s death, urging a law to be created to protect celebrities, and Katie, 45, was quick to voice her opinion on it.

Oh, how we all laughed.

Will #CarolinesLaw just be for people you agree with? pic.twitter.com/Cjtq2Nw2Tl

Katie – who has recently returned to the social media platform after a ban – said: “Oh, how we all laughed.

“Will #CarolinesLaw just be for people you agree with?”

Katie captioned images from a Twitter user who pranked her by flying her to Prague to win a fake award.

During her acceptance speech, she was heard making foul-mouthed insults and slurs.

“Katie Hopkins makes a living writing and saying hateful things about people under the disguise of ‘free speech’. People need protection against her, not the other way around,” one wrote.

Another commented: “Please just be kind. Stop your constant antics. There’s genuinely no need. If what you’re saying isn’t kind or you’re saying it with[out] any kind of compassion, just keep it to yourself. PLEASE.”

“I think the difference @KTHopkins is that #CarolineFlack did not spread hatred and the bile against other people,” a third wrote.

This isn’t the first time Katie has run into trouble for her controversial views on Twitter.

Little Mix’s Jesy Nelson revealed vile tweets about her weight pushed her towards trying to take her own life.

Katie was one of the people tweeting about Jesy’s appearance.

Speaking about the abuse in the moving NTA Award-winning BBC Three documentary, Jesy Nelson: Odd One Out programme, the singer said: “All I remember feeling at that time is what’s the [bleep] point?

“I starved myself for a week and I’m still getting called fat. I could be the skinniest girl in the world and this is never going to go away. That is the pinnacle point for me when I got severely depressed and it just spiralled out of control.”