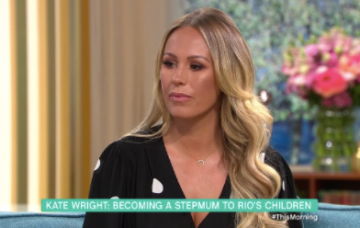 TOWIE star's life has changed since she met the retired footballer

Kate Wright has spoken of how much her life has changed since she met Rio Ferdinand.

The 26-year-old used to live alone and was forging a career as a reality TV star on TOWIE before she became the former England footballer’s girlfriend and step-mum to his three children.

She gave up her TV role so she could focus on their family life after Lorenz, 11, Tate, nine, and Tia, seven, lost their mum, Rebecca, to cancer in 2015.

On Tuesday’s episode of This Morning, Kate admitted adapting to her new role with the kids hasn’t always been easy.

“At the very beginning, one of them said, ‘You don’t know how to look after children because you don’t have any’.

“I know it sounds really silly because it’s a small child, but it does hurt your feelings a little bit because you really are trying your best. As time has gone on, they are used to me more.”

Kate said Tate has gone from calling her his “aunt” to “Rio’s girlfriend” to now “step-mum”.

She was keen to stress to presenters Holly Willoughby and Phillip Schofield that she is in no way trying to replace the children’s mother.

“Of course, Rebecca is their mum. You only have one mum. A mum is irreplaceable. There is a special room in the house for their mum,” she said.

“We celebrate big occasions, Rebecca’s birthday and Mother’s Day. We all go to the cemetery together. We do talk about her.”

Kate said she and Rio, 39, have also tried to make her transition into the family easier for the children by including them as much as possible.

She explained: “A really big part in our relationship, and it’s working with the children, is that everything we’ve done, we’ve included them in.

“So, from the first date to us moving in, to him asking me to be his girlfriend. Everything we have done we’ve included them in. The kids were part of it. So it feels like I wasn’t taking their dad away from them.”

She said she learnt from her own experience as a child of separated parents that this was the best route to take.

“My mum and dad broke up when I was young. I’ve had a couple of step-mums. This is a really big point as to why we include the kids so much. My dad got re-married and he didn’t invite me to the wedding. I will never forget that. I don’t want the kids to ever feel how I felt when I was younger.”

Rio and Kate met through mutual friends in Dubai at the start of 2017.

The following September, Kate announced she would be leaving TOWIE so she could focus on being his girlfriend and the children’s step-mum.

Speaking of that decision today, she said: “When I did that everyone thought I was crazy. My mum was thinking, ‘Oh my god!’

“I felt like I had two choices. I was in this world that had a lot of drama, it was very public. They had lost their mum, they don’t need another woman who is going to be out everywhere. They need someone who’s going to be home with them to give them love.”

Kate said she’s now so settled into the family, the children are keen for her and Rio to make it official!

“Now they say on a daily basis, ‘When are you giving us a brother and sister? When are you getting married?” It’s lovely how far we’ve come,” she said.

After the show, Kate took to Instagram to thank Holly and Phil for the interview.

She wrote alongside on image of them on the sofa: “Thank you Holly & Phil for having me, was very nervous but enjoyed getting the chance to talk about being a step mum, the great and more difficult parts.

“I’m very lucky to have Rio and the children in my life and I wouldn’t change it for the world.”

Do you have experience as a step-parent? What did you think about Kate’s interview? Leave us a comment on our Facebook page @EntertainmentDailyFix and let us know.