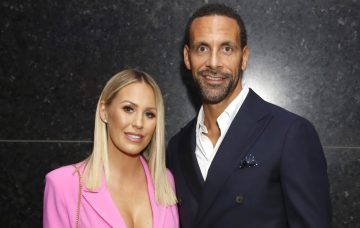 The couple shared the wonderful news with fans via Instagram on Thursday after former footballer Rio, 39, popped the question to ex-TOWIE star Kate, 27, in front of his three kids on holiday in Abu Dhabi.

Rio revealed his children – Lorenz, 12, Tate, ten, and seven-year-old Tia – knew he was planning to get down on one knee but managed to keep it a secret from Kate!

Both shared pictures from the happy occasion showing the kids first watching the big moment and then congratulating the couple.

The newly-engaged pair were flooded with congratulatory comments from friends and fans, including Hollyoaks’ Chelsee Healey and former TOWIE star Mike Hassini.

Kate previously spoke on ITV’s This Morning about how it was important for her and Rio to gradually introduce her into the kids’ lives once they knew their relationship was serious.

In an interview with Daily Mail’s You Magazine in August, Kate spoke about her strong bond with the children, saying they were now keen for her and Rio to have a child.

She said: “The kids would like a little brother or sister; they say ‘I dreamt that you were pregnant’. But right now we’re just happy with our little unit.”

Leave your congratulatory messages for Rio and Kate on our Facebook page @EntertainmentDailyFix and let us know what you think!