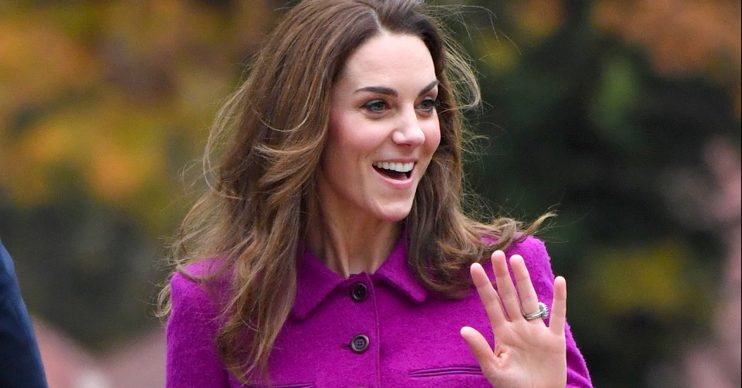 Her husband Prince William recently revealed that she likes nothing more than to watch the latest episode of Strictly Come Dancing on a Saturday night.

Now the Duchess of Cambridge has proved that she really is just like the rest of us as she recycled her outfit and arrived at a royal engagement by train.

Kate, in her role as Royal Patron of East Anglia’s Children’s Hospices, was in Norfolk – close to their Anmer Hall home – to officially open The Nook children’s hospice.

Kate stepped out in the outfit at the Royal Opera House back in January of this year. She also wore it to a mental health conference in 2017.

Further cementing her down-to-earth nature, the mother of three arrived at the engagement by train.

It was amazing. I shook her hand!

Once at The Nook, Kate met some of the families the hospice helps.

She accepted a bouquet of flowers from the family of three-year-old Stanley Harrold, who suffers from a rare chromosomal disorder.

Flag-waving school children who had raised money for the hospice greeted Kate as she arrived at the centre.

Read more: Aldi is selling a gin selection box but you need to be quick to nab one

One told Hello!: “Kate said what a great place The Nook is and how wonderful it was for us to help.”

The caring duchess showed off her motherly side at the event too, as she asked a child: “Are you cold?” and rubbed his arm after seeing him shiver.

“It was amazing. I shook her hand!” he exclaimed.

At least Kate managed to stay upright at the event.

She had onlookers worried – and husband Prince William in fits of giggles – as she tripped at an event earlier in the week.