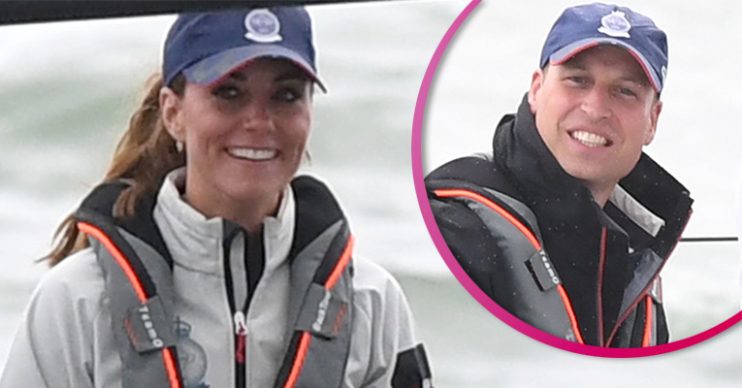 They raised funds for a variety of charities

The Duke and Duchess of Cambridge went head-to-head in a sailing race today.

The couple took part in the annual King’s Cup yachting regatta in Cowes, Isle of Wight, on Thursday afternoon and were joined by the likes of Bear Grylls, John Bishop and Helen Glover.

Kate, sporting a radiant tan after recently returning from a family trip to Mustique, was seen smiling at her hubby shortly before the competition started.

The Duke and Duchess of Cambridge with The King’s Cup charity ambassadors, Fara Williams for @CentrepointUK, Dan Snow for @LDNairamb, Bear Grylls for @Tusk_org, John Bishop for @ActionAddiction, Katie Thistleton for @Place2Be, and Helen Glover for @AFNCCF 🏆 pic.twitter.com/NqcAREjPJX

Read more: Norfolk cottage next to Prince William and Kate Middleton is now up for rent

The Duchess wore a pair of navy shorts and a white polo top as she posed alongside William and The King’s Cup charity ambassadors.

She had her brunette locks tied up in a ponytail as she sported a navy hat.

Kate later put on a padded coat to keep her warm on the water.

Meanwhile, William wore the same as Kate but put on a black coat when they hit the water.

The royal couple were skippers of their own boats and competed against six other teams.

They battled it out for the The King’s Cup trophy, which is a cup first presented by King George V at Cowes’ Royal Yacht Squadron in 1920.

The event raised funds for eight of the couple’s charities including London Air Ambulance, Action on Addiction, Place2Be, Child Bereacement UK and Centrepoint.

Kate and William, who have three children, were both keen sailors ever since they were teenagers.

The couple both enjoyed rowing while at school and Kate was also part of a team while at university.

The charity sailing event was rescheduled to today as rain and “adverse conditions” has been forecast in Friday at Cowes, which is when it was originally set to take place.

A statement on Twitter from Kensington Palace noted the event was open to public spectators.